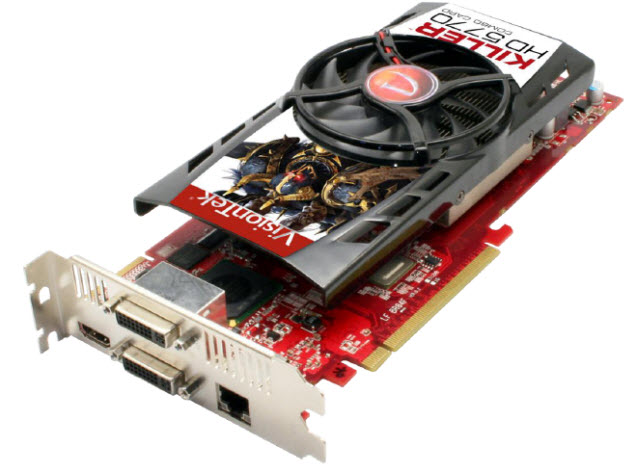 Bigfoot Networks is announcing today that its super-fast networking card — which can speed the internet on your computer by 10 times — can be built directly into a graphics card made by VisionTek Products.

By integrating its networking product into a graphics card, Bigfoot expects it will have a much easier time getting its technology into the hands of consumers. It can also reduce the combined cost of the solution and pass the savings on to consumers. Inverness, Ill.-based VisionTek, meanwhile, can offer a unique product that no other graphics card vendor has.

In the past few years, Redwood City, Calif.-based Bigfoot has figured out how to speed up the internet on a PC by more than ten times the typical speed for a home broadband-connected computer. If your DSL (digital subscriber line) broadband phone line normally offers you internet access at 1.5 megabits a second (fast enough to look at web sites), then Bigfoot’s Killer Nic 2100 card can make it feel like 15 megabits a second (or fast enough to let you watch videos or play high-speed online games without annoying slowdowns).

To get that speed boost, gamers had to take a big step before. They had to pay $129 for a Killer 2100 gaming network card, which they installed in a free slot in the computer, known as a PCIe slot. The problem was that many systems sold at retail don’t have extra PCIe slots, and that turned off some customers, said Michael Howse, chief executive of Bigfoot, in an interview.

Now, with the Killer technology built into the VisionTek Killer HD 5770 graphics card, Bigfoot has knocked down that barrier and lowered the cost as well. The graphics card sells for $199, which is at least $50 cheaper than purchasing two separate products.

“We’ve taken away the excuse of not having room in your computer,” Howse said.

At the same time, Bigfoot will have a much better business model. Instead of making low-margin hardware, now Bigfoot can license its technology to vendors such as VisionTek, which will integrate it with their own graphics cards. Bigfoot is essentially selling its own chips and software (known as the Bigfoot Networks Killer E2100) to the vendors rather than to consumers.

VisionTek, which is one of the biggest graphics card suppliers, will incur the expense of marketing the product, but it also can set itself apart from the dozens of other graphics cards on the market. By putting the Killer technology on the same hardware as a graphics subsystem, Bigfoot can eliminate some costs from the computer.

The Bigfoot technology comes with software that users can fire up on their computers. It can tell them which applications are slowing down the computer, and it can block them so they don’t interfere with online games. Howse said that VisionTek has been a close partner for a while and the two companies worked on the product together. Bigfoot will also license its technology to a variety of other computer companies.

“This is a business model that can scale up,” Howse said.