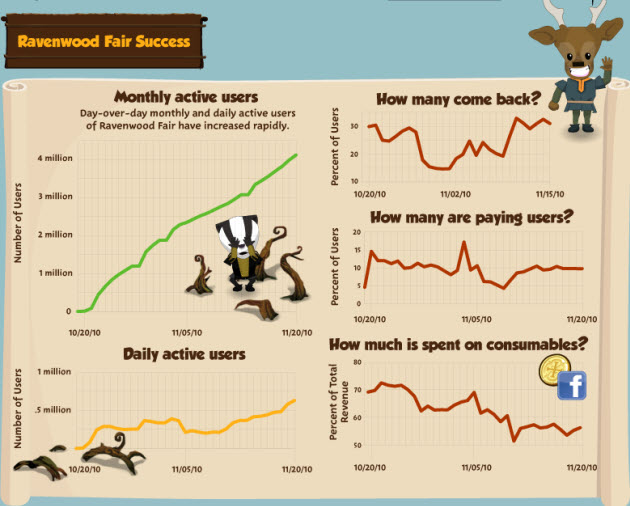 In a useful case study for Facebook developers, LOLapps is unveiling the stellar results it has gotten with Ravenwood Fair, a social game launched on Facebook on October 19.

In six weeks, the game has grown to 4.4 million users, according to AppData. And in a talk at the Social Gaming Summit East, LOLapps chief executive Arjun Sethi says that those players are also spending money. As you can see in the charts above, more than 10 percent of users are spending money in the game. And anywhere from 50 to 75 percent of that money is spent on consumables, or items such as extra energy that can be bought over and over again.

For social games, those are good numbers. Facebook games are free-to-play, where users can play for free and pay as they go. They pay real money for virtual goods, such as tractor fuel in Zynga’s FarmVille. But only 3 to 5 percent of users typically pay, and the amount of users buying goods tends to decline over time. With Ravenwood Fair, LOLapps is clearly tracking well above that.

In the game, users find themselves as a cute animal in a forest. The goal is to chop down trees and build a fair in the clearing and attract more cute animal visitors. But the forest is creepy and you have to constantly battle back the trees and monsters that try to scare your visitors.

As we’ve noted in past stories, San Francisco-based LOLapps has about 100 million monthly active users on Facebook, mostly for its gift and quiz apps. This year, the company stepped up its investment in social games. Ravenwood Fair was developed by consultant John Romero, co-creator of Doom. In an interview, Romero said he put more emphasis on keeping users engaged so they would play for longer sessions and keep coming back. The effort is part of LOLapps’ strategy to become a big player in social games and join the ranks of Zynga, EA-Playfish, Disney-Playdom, and CrowdStar. Those companies have been printing money by creating simple casual games that entice users to buy virtual goods.

Ravenwood Fair was almost derailed. It was supposed to launch on Oct. 15, but Facebook pulled down all LOLapps games on that day and didn’t restore them until the evening of 17, citing only “violation of Facebook’s policies.” The Wall Street Journal reported that some games, including LOLapps titles, were wrongfully transmitting user data to third-party companies. Of those companies, LOLapps was one that was singled out and shut down. Sethi said LOLapps worked with Facebook to restore its games and will ensure it can protect users’ safety and abide by Facebook’s policies. By Tuesday, Oct. 19, LOLapps was able to launch Ravenwood Fair on Facebook. The company has pretty much put that problem behind it, but it also launched its own RavenwoodFair.com web site game, as part of a move to diversify away from Facebook.