Gowalla, one of the earliest and best-known services that lets you share your location with friends, is releasing a big upgrade today. The most noteworthy addition is the fact that it now lets users check in and view their friends’ check ins on competing services like Foursquare.

Co-founder and chief executive Josh Williams demonstrated the new features of Gowalla version 3 for me on Tuesday. He acknowledged that for some users, picking Gowalla can be tough. They might like Gowalla better as an application, but many of their friends may be using Foursquare or Facebook Places.

Now, you shouldn’t have to make that choice, said Williams. You should be able to use Gowalla while sharing your location with friends elsewhere and also seeing where those friends have checked in, all in a single “activity view”. Gowalla 3 connects with Foursquare, Facebook, Twitter, and blogging service Tumblr. (This also expands on Gowalla’s previously-announced integration with Facebook.) 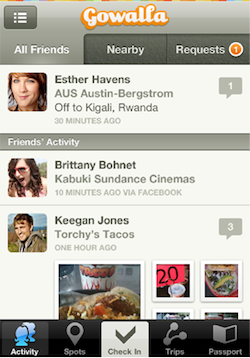 There are already applications that support multiple check ins, like Mayor Maker, but Williams described them as “lowest common denominator” apps that don’t have Gowalla’s features like photos and comments. Behind the scenes, Williams said Gowalla has built a database that matches up locations in each service, so that you’re actually checking in to the same location across apps.

This seems like a smart move, particularly since Gowalla has around 600,000 registered users (it calls them Passport holders), putting it behind Foursquare (which is “closing in” on 5 million) and Facebook Places (which isn’t offering any specific numbers, but is believed to be the biggest of all). If nothing else, it means that Gowalla fans will feel less pressure to switch, even if many of their friends are using a competing service. And they still have to use Gowalla if they want to use features like photos and comments.

Gowalla 3 isn’t just about playing nice with the competition. There’s a cool new “Notes” feature, where you can leave a note for a friend at a specific location — they’ll be alerted right away, but they won’t be able to read it until they check in to the designated spot.

And the check-in process should be faster now, with Gowalla instantly bringing up a list of nearby locations that you’ve visited in the past. Hopefully, that will help avoid situations where it can take a minute or two to check in (which has happened to me on Foursquare).

We profiled Williams recently as part of our Local Heroes series on location-based startups, but this was my first chance to talk to him in-person, so I was curious about his thoughts on where the industry is headed. Williams said there will probably be some consolidation soon and that it will definitely be hard for new services to break in.

At the same time, he argued that the big services have different purposes — Facebook seems focused on deals and connecting to your larger social network, Foursquare has built fun game mechanics, while Gowalla is more about sharing experiences.

“I don’t think it will be a bloodbath,” he said.

Gowalla is based in Austin and has raised $10.4 million from Greylock Partners, Alsop-Louie Partners, and Founders Fund.