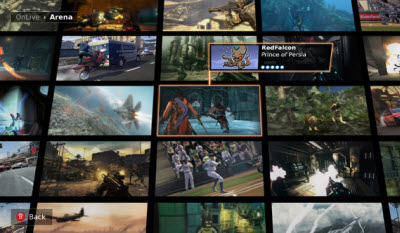 Online gaming service firm OnLive is announcing today that it will offer an all-you-can eat $9.99-a-month subscription plan for gamers to access a library of video games. The move is as potentially disruptive as what happened to sales of DVDs when Netflix offered monthly subscriptions for access to a library of movies.

OnLive offers instant gratification with its games-on-demand service that debuted in June. Users log into OnLive and immediately play games that are computed and stored on OnLive’s data centers. Users don’t have to download anything and don’t need a high-end computer to play high-end games. So far, OnLive has been offering a la carte game sales and game rentals. Since OnLive focuses on digital distribution of games, it can disrupt retailers such as GameStop and put more profits in the hands of game publishers.

The company will keep offering those options. But on January 14, OnLive will start its $9.99 a month Play Pack subscription. Users won’t be able to get the newest premium games in the Play Pack. But they will get high-quality recent games that are perhaps six months old or so, and they will be able to play new indie games as well as classic games. The exact number is a moving target. Steve Perlman, chief executive of Onlive in Palo Alto, Calif., said in an interview he believes there will be about 40 games in the Play Pack by the time of the launch in January.

Perlman said that the strategy is aimed at vastly broadening the company’s potential market of game customers. With a flat-rate subscription, OnLive will pursue the same path that Netflix has successfully followed, attracting users who don’t necessarily want to dish out a lot of money for one title but don’t mind paying a monthly fee to sample a bunch of games. For premium new games, OnLive offers a la carte pricing, much like Apple’s iTunes store does.

“In this economy, you want to offer the users a lot of options for paying,” Perlman said. “You won’t find a lot of new releases on Netflix. But you will find classic films and new release indie films. With the flat rate, consumers have more ways to buy. This is all about reducing friction that stops a consumer from picking up a game and playing it.”

Michael Pachter, analyst at Wedbush Securities, said that OnLive’s payment options give users “maximum flexibility” in trying or buying video games. He agreed that the combo of Play Pass (a la carte purchases) and Play Pack (flat rate) is just like the distinction between Netflix and iTunes. The Play Pack option will be free for the next six weeks in beta mode. After that, OnLive will start charging subscription fees. As an example, Take-Two Interactive’s basketball game, NBA 2K10, will be available in the flat-rate subscription as one title in the library. But the newer version, NBA 2K11, will sell as an a la carte title. Users can cancel their monthly subscription at any time. 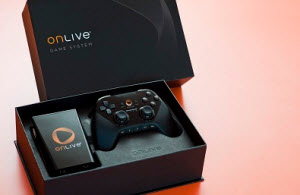 Perlman also said that OnLive is now shipping its MicroConsole game system (pictured right) to people who placed the first preorders in mid-November. The $99 MicroConsole is a small adapter that plugs into your TV and allows you to play high-definition games on your flat-panel TV. The OnLive hardware could disrupt the more expensive consoles, especially as more high-end games become available. If you want to play on a PC or a Mac with a computer monitor, you don’t need the MicroConsole.

Perlman said the first manufacturing batch of MicroConsoles sold, the company is taking orders for a second batch now. OnLive investors include Warner Bros., Autodesk, Maverick Capital, AT&T, British Telecommunications and The Belgacom Group. The company was founded nine years ago and has 200 employees. Because its technology is potentially disruptive to traditional game retailers, investors recently valued the company at $1.1 billion.