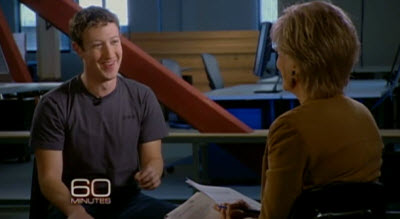 Mark Zuckerberg, once nicknamed the “toddler CEO” as the baby-faced chief of Facebook, was very poised and comfortable while talking to Leslie Stahl in an interview aired tonight on 60 Minutes.

The Zuckerberg we saw tonight on the CBS show was far more mature than in disastrous interviews just six months ago. Given how calm he seemed tonight under the bright lights, it’s hard to believe that this multibillionaire is just 26 years old.

It makes you think that, whatever mistakes he’s made in the past, he’s growing as a person. By extension, he seems very much in control of his company; he’s not a kid that somebody is going to push out so easily. The Zuckerberg here was talkative and humble, not awkward and arrogant as he is portrayed in The Social Network movie. Even as he talked about how many mistakes he has made, he was smiling, not sweating bullets.

The piece opened with a focus on the update for Facebook Profiles, which has been revised to highlight a person’s photos, relationships, history with their friends, what the person is all about. (See our earlier story on what’s new with Profiles). Photos are uploaded at a rate of 100 million a day, so Facebook finally wants to depict them in the right way. PaidContent has noted that the Profiles update is a cosmetic change that 60 Minutes overplayed.

Beyond the Profiles news, there wasn’t a lot new in the interview. Chris Cox, head of product at Facebook, was also interviewed by Stahl and denied that Facebook was working on its own mobile device, as has been rumored. Facebook has denied those rumors before and denied them again; instead, he said that Facebook is making software that will run on all phones. Zuckerberg predicted that whole industries will get remade to reflect the power of social networking. He sounded visionary, but he tried to make it seem like Facebook wasn’t taking over the web.

In past interviews, Zuckerberg has been more on the defensive — like when he was in the hot seat at the D8 conference in June being interviewed by Kara Swisher of AllThingsD and Walt Mossberg of the Wall Street Journal. He was so nervous while answering questions about privacy that he sweated up a storm. That interview, Stahl recalled on 60 Minutes, was so bad it became known as “sweatapalooza.” At that time, while watching that interview, it was easy to conclude that this kid wouldn’t last in his job for very long. 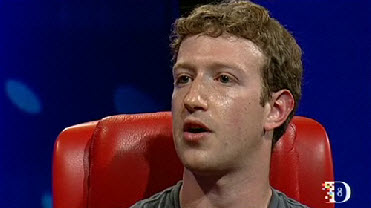 Perhaps it was a great job by CBS’s make-up artists. But this time, Zuckerberg didn’t perspire anywhere near as much as he did during sweatapalooza (as pictured on the right).

This good interview doesn’t seem like a lucky accident. At the recent Web 2.0 Summit in San Francisco, Zuckerberg was also at his best, answering questions put to him by co-hosts John Battelle and Tim O’Reilly.

The second half of the 60 Minutes segment focused on Zuckerberg as a person and how he started the company. As captured in The Social Network movie, Zuckerberg’s start was controversial. The Winkelvoss twins, Tyler and Cameron, once again berated Zuckerberg for betraying them (they established that they had a social network idea first and that Zuckerberg sandbagged them in order to give Facebook a headstart), in an interview with Stahl in today’s segment.

That topic is well-worn, and Zuckerberg once again dismissed their claims because they were working on a dating site. He noted that the movie got a lot of things wrong, including the fact that he wanted to start the site so he could date more women. He noted he is dating the same woman now that he was before he started Facebook. (He didn’t mention a breakup and reunion, but that’s beside the point). 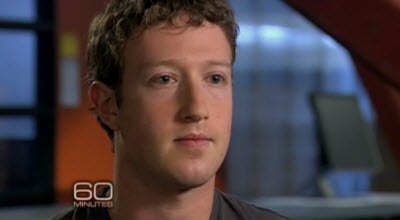 Zuckerberg said that one of his best decisions so far was not selling the company. Back in 2006, he got a lot of pressure from investors such as Jim Breyer of Accel Partners to sell the company to Yahoo for $1 billion. Now that Facebook is worth so much more — $30 – $50 billion — that decision proved to be the right one.

As part of the 60 Minutes story today, Swisher acknowledged that Zuckerberg, whom she nicknamed the “toddler CEO” three years ago, has turned out to be a prodigy who has done a great job running Facebook. Swisher dismissed the Winkelvoss twins for constantly challenging Zuckerberg, since they have taken their $65 million settlement and done very little with it while Zuckerberg has built a landmark company. For their part, the Winkelvoss twins admit that they have Facebook pages. Zuckerberg said he feels “bad that they still feel bad about it.”

Asked if he would ever “let go” and do an initial public offering, Zuckerberg said that selling the company isn’t an endpoint. It’s almost as if Zuckerberg now has a chance to remake his image so that he isn’t viewed as a backstabber, as he was in The Social Network, but rather as an entrepreneur who inspires others coming behind him to do something just as big.