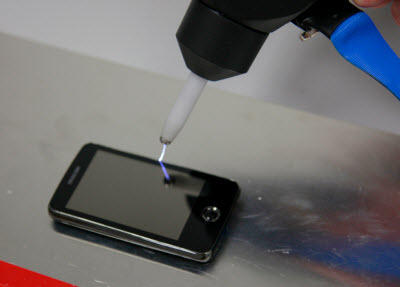 It’s a real bummer when you lose an expensive piece of equipment because of electrostatic discharges. That’s why Shocking Technologies has used nanotechnology to protect electronic products from the accidental sparks that can ruin your iPhone or other gadgets.

San Jose, Calif.-based Shocking Technologies is opening a 50,000-square-foot manufacturing plant today where it can make its plastic coating — a polymer nano-composite called XStatic 100 Voltage Switchable Dielectric — for as many as 200 million cell phones a year. The material can protect phones, handheld devices, displays, chips and other gadgets.

The world learned the lesson of the dangers of electrostatic discharges when ESD allegedly brought down the Hindenburg blimp in 1937.

The company can embed the XStatic material in an electronic circuit board or chip package to protect against discharges, which are the sparks that occur when a strong electric field creates an ionized conductive channel in the air. That gives a person a little shock but it can cause severe damage to electronic equipment. 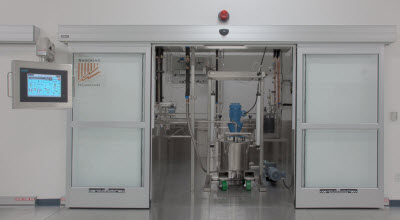 Traditional ESD protection includes providing surge suppressors in electrical outlets and inside products themselves. Those typically provide protection about 3 percent of the time. For smaller devices, protection is a lot more challenging because of the limited space and the device’s physics. That forces product designers to choose between reliability, signal integrity, and functionality. Shocking Technologies says it can give 100 percent protection while reducing the number of components in an electronic device.

Feedback from potential customers has been good, said Lex Kosowsky, president and chief executive of Shocking Technologies. He said the company is now able to begin production, thanks in part to a $500,000 investment in capital equipment from the City of San Jose’s Redevelopment Agency.

The XStatic material functions as an insulator (dielectric) during normal circuit operation and becomes conductive when the voltage increases beyond a predefined threshold. The material reverts back to being an insulator after the voltage drops. The net result is that all chips mounted on a board are shielded from ESD voltage spikes that would otherwise cause damage. The material is coated around thin copper foil, which protects the boards and chips.

XStatic also fits into a product design much more easily than surge suppressors. Typically, designers go through a trial-and-error process to find the right spot within a design for a surge suppressor. That takes a lot of time.

The company was started in 2006 by chip and nanotech experts Kosowsky and Robert Fleming. and it has more than 100 patents and pending applications for patents. To date, Shocking Technologies has raised $32.2 million.