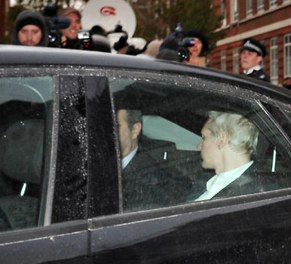 Julian Assange, founder of whistle-blower site WikiLeaks, turned himself in to the London police earlier today, where he was arrested through a Swedish arrest warrant for alleged sexual offenses.

Assange, who has denied the allegations, was refused bail by the London police and will remain in custody until a court session on December 14. He has said that he would resist extradition to Sweden, which would mean having to prove not getting a fair trial in the country.

Despite the news, WikiLeaks clarified by posting to its Twitter account that the site’s operations would not be affected. “Today’s actions against our editor-in-chief Julian Assange won’t affect our operations: we will release more cables tonight as normal,” a spokesman for the site tweeted on its account.

Additionally, according to CNN, the site has posted an encrypted file its lawyer describes as “thermonuclear device.” Assange has said that the file, which has been downloaded over 100,000 times, will be used as “insurance”, and that volunteers for the site will share the encryption key “should anything happen to him or the site gets taken down.”

It is worth noting that while Assange has been flagged by the Interpol for questioning, this arrest is unrelated to his work on the site and comes directly from his sexual misconduct allegations in Sweden.

After it released 251,000 secret U.S. state department documents, WikiLeaks has been grappling in the news for the past two weeks. Over this time, it has created a stir among world governments, who have denounced the site’s actions, been booted by its domain name service provider EveryDNS, and had its accounts suspended from Amazon’s S3 and EC2 hosting services and PayPal. After finding refuge from a Swedish domain name service, it is currently living on at wikileaks.ch.