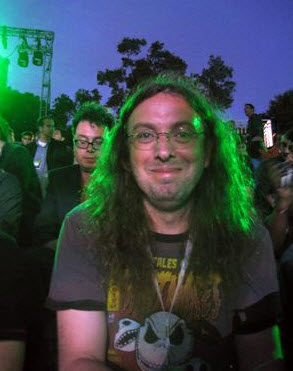 Graeme Devine gave Apple a lot of credibility when he joined the company to work on iPhone game technologies. But Devine told the game blog Kotaku that his last day at Apple was Friday.

The departure of one person may not be that important, of course. But gurus such as Devine can be very influential among the third-party developers who make games for Apple’s devices. Without these evangelists to keep developers happy, Apple could lose its developers to other platforms.

Devine said he was leaving the company to work on game development again. He’ll make games that run on the iPhone and iPad, so he’s not sour on Apple. Devine’s job was to convince game developers to make games for Apple’s devices. He also had to make sure that games worked great on iOS devices, or those that run the iPhone operating system such as the iPhone, iPad and iPod Touch.

Devine said Apple didn’t have an in-house game designer before he joined the company in 2009. In the past, games were treated like second-class citizens on a lot of Apple platforms. But when the iPhone took off, the No. 1 reason was because of the quality of its game apps. Only in the past year have the number of games been surpassed by books as the top category on the iPhone.

As for Apple in the future, Device said, “I can’t comment on what’s next inside Apple, but I can tell you, they really do ‘get’ gaming.”

Devine has been making games since the late 1970s. He joined Atari at age 16 and founded Trilobyte, a well-known game studio, in 1990. The company was known for its 1992 horror game, The 7th Guest. He also worked as a game designer at id Software on titles such as Quake III Arena and Doom III. [photo: Reality Panic]