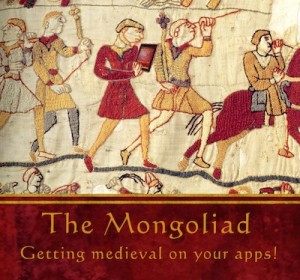 Startup Subutai continues to charge ahead with its digital publishing experiment The Mongoliad. The writing team, which includes popular science fiction authors Neal Stephenson (who is the company’s chairman) and Greg Bear (its senior creative advisor), has now published around 15 chapters, and the company has also released applications for the iPhone and iPad.

The app and website use a technology for electronic novels that Subutai calls the Personal Ubiquitous Literature Platform (PULP). At The Mongoliad‘s core is an adventure novel set in the 13th century of “a universe very much like ours,” serialized with a new chapter coming out each week. The novel will be divided into seasons like a TV show, with the first season estimated to take about a year. Around the basic text, Subutai offers additional content like maps and illustrations. And readers can participate by discussing the story on the website, as well as writing and editing entries in an encyclopedia about the setting.

When The Mongoliad launched at the end of August, it was Web-only. President and chief technology officer Jeremy Bornstein said the company hadn’t quite managed to get the iPhone and iPad apps approved at the same time, leading to a flood of requests from readers. Subutai answered those requests with the app launch in October, and Bornstein said he’s been frequently releasing updates to improve the experience. The team is also working on Kindle, Android, and Windows 7 apps — with Kindle probably coming first.

I downloaded the iPhone app this morning. Even before you sign-up for a subscription, there’s some free preview content, which you can navigate with a smooth swiping interface. (I actually prefer it to Apple’s standard iBooks interface.) Then with just a few clicks, you can purchase a six-month or 12-month subscription ($5.99 and $9.99, respectively) to get access to the full novel (which will eventually be released in print).

Bornstein declined to provide any subscriber numbers, but he said he’s happy with the response to the subscription model. The story seems to have struck a chord with fans, with the first piece of fan art submitted three hours after the initial chapter was published, and fan-written stories showing up in the forum. (Bornstein said the app will eventually feature fan stories more prominently.) Subutai even found takers for the one-year “patron” plan at $249.99 and a “lifetime patron” plan at $999.99.

“It’s very gratifying, because when we were deciding how to price it, there were really no models for us to follow,” Bornstein said.

I also had a chance to talk to Bear about his involvement in the process. It’s not like writing a normal novel, because he’s working with a team, but he said that team spends more time talking about the story than “newfangled tech.” He added that it’s “fascinating” to see the digital format that he’s been speculating about for decades become a reality, particularly because it enables such a high level of reader involvement.

“When Frank Herbert was writing Dune, he would keep a large notebook with all the details of the universe,” Bear said. “What we’ve got with The Mongoliad universe is almost the opposite, where the readers are building that encyclopedia for us.”

Although Bear is best-known (in my mind, at least) for classic science fiction novels like Blood Music and Eon, he’s not a stranger to new media. He’s also writing a prequel trilogy of novels set in the popular Halo video game universe, starting with Halo: Cryptum in January. With an original novel (Hull Zero Three), a collaboratively written novel set in a universe that he jointly created (The Mongoliad), and a novel where he’s “a well-paid servant of the universe but also the fan” (Halo) all coming out within a few months of each other, Bear said, “I’m covering all the bases — it really keeps the wrinkles in my brain going.”

Subutai is based in Seattle and San Francisco and is self-funded.