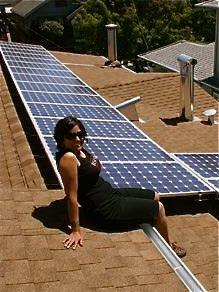 Solar financing startup Sungevity has raised $15 million in a third round of financing to put more solar panels on rooftops by leasing or selling the systems to homeowners.

The company has now raised a total of $25 million, and Sungevity CEO Danny Kennedy said the company will use the capital to expand. Using a hot solar model, Sungevity offers solar leases that allow homeowners to put panels on their roofs for little to no money down. They then pay a monthly lease plus the cost of electricity generated, a combination that Sungevity says can beat traditional electricity rates. The company currently offers the leases in California, Arizona and Colorado, and will expand using the new round of cash.

“We’re looking to go to many states next year and basically get a national foot print. We’re really looking at the northeast,” said Kennedy, speaking from Washington, D.C., where he said he was doing market research.

Solar seems to be attracting a nice level of interest from venture capitalists lately, endangered subsidies or not. Thin-film cadmium telluride solar panel manufacturer Abound Solar yesterday closed on $510 million in funding to expand its manufacturing capacity. According to Greentech Media, Google Ventures and Kleiner Perkins Caulfield & Byers have invested in Clean Power Finance, a software-as-a-service firm that makes a tool for solar installers that speeds up and streamlines bidding, rebates and sales proposals.

Sungevity is a smaller potato compared to its larger and buzzier counterparts, the Elon Musk-backed SolarCity and the Sequoia-backed SunRun (both of which are said to be potential IPOs in 2011). While both SunRun and Sungevity say there’s enough room in the solar leasing market to accommodate the competition, Kennedy pointed out that his company has been able to show good growth with less capital than what’s been raised by others in the field, in part because of its centralized, Internet-based model that operates largely out of the company’s base in Oakland, Calif. The company grew its market share in top solar market California from 0.4 percent to 2.9 percent last year, and says its kilowatts sold have gone up 10 times since last year for a total of 4.7 megawatts. 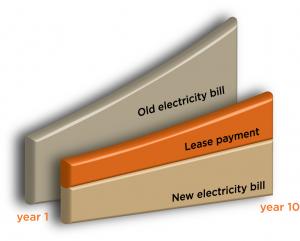 The company’s pitch is that it’s the Netflix of home solar — that is, it’s all about tapping into convenience through the Internet. Sungevity uses an Internet-based model that pulls in satellite images from sites like Bing to assess homes and give residents quotes within 24 hours of their request. The company is planning to roll out more consumer-side software and streamline the paperwork process using the web; customers can currently electronically sign their leases online. Another differentiator: Sungevity offers 10-year plans for power purchase agreements and leases, which is significantly shorter than the standard 20- or 25-year plans in the solar industry.

It’s playing in a field that is set to grow from about 80,000 houses with solar to 2.4 percent of the U.S. housing market by 2020, according to Bloomberg New Energy Finance, though Kennedy told me at GreenBeat 2010 that he thinks those numbers are low. In a statement, the company cited a new report by IDC Energy Insights that said the rate of North American solar installations is expected to double in 2011.

Investors in this round include Greener Capital, Firelake Capital and Brightpath Capital Partners.

Correction 7/25/2011: We’ve removed a reference to the expected increase in market share of solar leasing companies, since IDC Energy Insights has informed us that this statement was not in its report.