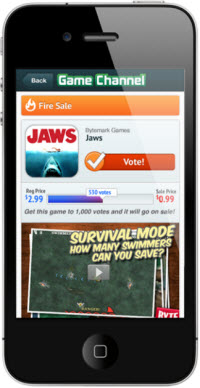 If it works for Groupon, maybe the group-buying craze will work for mobile games. With that logic, OpenFeint launched a program today that will let groups of gamers buy iPhone and Android games at deep discounts.

Millions of consumers already buy goods and services at deep discounts via group-buying services such as Groupon, which is so hot it recently turned down a $6 billion acquisition offer from Google. The vendors providing the goods can see huge increases in volumes, while the participating consumers get great deals. OpenFeint’s model for Game Channel works the same way by tapping into the company’s network of 50 million mobile game players. And if it works, there should be plenty of happy game publishers, developers and gamers, because they will have a new way of buying and selling games.

Burlingame, Calif.-based OpenFeint offers software that developers can use to bolt a social network onto their mobile games. By adopting OpenFeint’s software development platform, the game developers can automatically add social networking features such as friend lists, leaderboards, multiplayer challenges, and virtual goods monetization. More than 1,000 game developers are using it, and their 3,800 games collectively have more than 50 million users. The Game Channel will push discount deals to those gamers on a daily or weekly basis.

It could prove useful to mobile game developers because they need all the help they can get when it comes to marketing and distribution. That’s because there are tens of thousands of apps competing for the attention of smartphone users. It’s a huge discovery problem, and OpenFeint is offering one more way to get noticed through the group-buying deal. I’m not convinced it will work spectacularly well, since mobile games are pretty cheap already. Many apps are free-to-play, where you play the game for free and pay real money for virtual goods.

But OpenFeint will offer discounts to premium games normally priced $1.99 to $9.99. When enough Game Channel users vote to say they want the game, then the price of the game drops. OpenFeint sends push notifications to users saying that the game is on sale for a limited time. The first game eligible for the Fire Sale discount is Jaws, a shark game based on the movie from Bytemark Games.

OpenFeint was founded in 2009 and has 40 employees. Rivals include DeNA’s Ngmoco, Scoreloop, PapayaMobile, and others. Investors in OpenFeint include The9, YouWeb, and DeNA. (Yes, that’s right. DeNA has stakes in two rival companies).