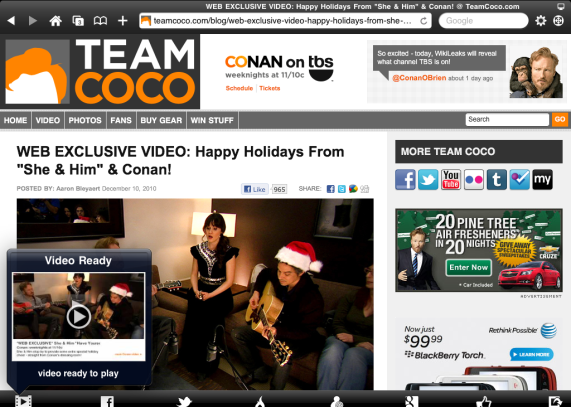 After finding success on the iPhone with its Flash video-capable mobile browser, SkyFire is now gearing up to launch a version of its mobile browser for the iPad. In addition to Flash video, SkyFire’s iPad app also comes with social features for Twitter, Facebook and Google Reader.

The company says it is waiting for approval for its iPad app, but after Apple approved its iPhone app, I don’t suspect that there’s any reason its iPad version would be rejected. SkyFire’s $2.99 iPhone version drew over 300,000 downloads and made $1 million in its first weekend — a sign that Apple users really want Flash video support. With an iPad version, users can now watch Flash video on the device’s larger 10-inch screen.

SkyFire’s servers transcode Flash video content into an Apple-approved HTML5 standard. To users, this means a slight delay before the video starts playing, but it also leads to more efficient playback as SkyFire’s compression is on average 75 percent more efficient than standard Flash video.

The iPad app also brings some social features that the company first introduced in its SkyFire 3.0 app for Android. It offers Twitter and Facebook “QuickViews”, which let you keep track of your feeds, profile, friends and more. It also has a built-in RSS feed reader and includes support for Google Reader. SkyFire also implements some Facebook features directly into its browser — you can “Like” any story instantly by hitting a button on its toolbar, and it can also tell you which stories are popular among Facebook users.

It’s unclear how much SkyFire will charge for its iPad browser, but I suspect it will be a few dollars more than its $2.99 iPhone version.