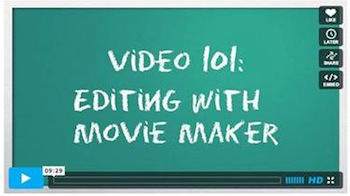 Vimeo pitches itself as a YouTube alternative that features more original, high-quality content. Today the company is unveiling a new initiative that could make Vimeo’s videos even better, as well as attract a new audience of aspiring filmmakers.

Titled “Vimeo Video School”, the project involves more than 800 video lessons and tutorials covering different aspects of filmmaking. There’s a Video 101 series created by the Vimeo team, which covers the basic steps of creating a film, like choosing the right camera and simple editing techniques. There’s also a “DSLR Basics” series created with videographer Philip Bloom, which talks about how to use DSLR cameras.

And this effort isn’t just about creating new videos, said Blake Whitman, Vimeo’s director of community and product. In fact, it was largely a response to behavior that was happening on the site already, where users would see a video that used a cool shooting or editing technique, so they posted comments asking how it was done. In response, filmmakers sometimes created behind-the-scenes tutorials showing how they achieved specific effects. With Video School, Vimeo highlights those tutorials, both in a special Video School section on the website, and with links strewn alongside relevant videos.

This isn’t the first effort from Vimeo (which is owned by online conglomerate IAC) to develop its filmmaking community. It also held its first video festival and awards earlier this year.