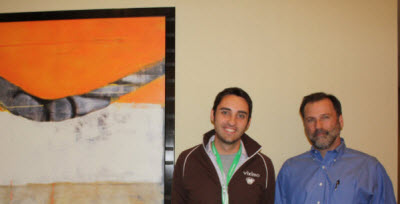 Facebook may dominate the social game market, but it isn’t the only show in town. Viximo has made a good business out of providing games to dozens of smaller social networks. The company is announcing today that it reaches more than 100 million users.

Cambridge, Mass.-based Viximo is a kind of middleman that takes games from promising developers and makes them available for social networks to embed on their own sites. Its success so far shows there is life beyond Facebook, the world’s biggest social network with more than 500 million users. The company recently added MyYearbook and CafeMom as partners. The network also includes Bebo, VZnet, and IMVU. Earlier this year, Viximo’s games only reached about 60 million users.

The social networks can always cut out the middleman and get developers to design games directly for their web sites. But that often comes with a lot of hassle, and it’s not easy to get the attention of game developers these days, said Dale Strang, CEO of Viximo, in an interview (pictured, on right, with co-founder Brian Balfour, left). Each social network usually takes a small number of games, anywhere from one to eight, from Viximo’s available library of titles. Viximo adds value by simplifying the process for deploying games and making money from them, Strang said.

One of the biggest new partners is IMVU, which recently pivoted from being a virtual world for teens to a social game web site. Among Viximo’s 15 games today are Fishdom by Playrix, Backyard Monsters by Casual Collective, Famandia by Plarium, and Resort World, by GameInsight. Some of the partners are quite big; StudiVZ in German has 16 million unique monthly visitors. Rivals include social networks that commission their own games as well as companies such as Heyzap and PlaySpan.

Viximo was started in 2007 and has 25 employees. Viximo has raised two rounds of money from North Bridge Venture Partners and Sigma Partners.