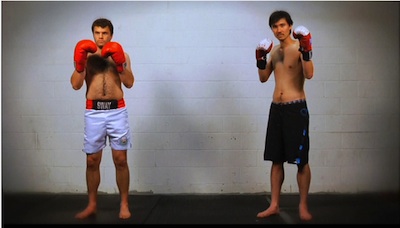 This is a big night for Nate Houghteling and Kai Hasson. After months of training, they’re going to face each other in the boxing ring — and the match will also serve as the climax of the Web TV show they star in, White Collar Brawler.

The show is a full-time job for Houghteling, Hasson, and the two other members of their production company Portal-A Interactive. Over the course of 22 episodes (so far), the show has followed the pair as they’ve gone from being out-of-shape, white-collar workers to buff(-ish), semi-serious boxers. There have been detours like a massively popular fan video for the San Francisco Giants set to a version of “Don’t Stop Believing”, as well as the Tech Beat Up, where tech employees fought each other while wearing inflatable gloves. (I was thoroughly defeated by Zynga’s Rick Johanson).

Behind the scenes, Houghteling said the team has been experimenting with how to turn the show into a profitable enterprise. The company runs ads before each episode, but Houghteling said he sees more potential in events. He and Hasson hold weekly workout sessions that fans can join, and 10 to 20 people show up each time. Between 200 and 250 people attended the show’s kickoff event, 400 people came to the Tech Beat Up, and Houghteling estimated that 500 or 600 will show up for tonight’s bout.

Not all of those events were moneymakers for Portal-A — the workouts are free, and the Beat Up raised money for charity. But Houghteling said the turnout shows that White Collar Brawler is onto something in its efforts to cross over from the Web to the real world.

“It started to become more apparent to us that people have a desire to come out to real events,” he said. “That’s something the Web hasn’t really tapped into.”

Events also sound like a more effective way to make money from a small, passionate fan base (and one that’s largely based in the San Francisco Bay Area) than advertising. The Giants video has received more than 2 million views, but an average episode gets between 2,000 and 10,000 views on YouTube, and about the same amount on Blip.tv. (Houghteling’s observations also match what tech blogs like VentureBeat seem to be doing, where a lot of our revenue comes from conferences.)

As for what comes next, Houghteling said he’s definitely thinking about season two, and that fans can expect a formal announcement about the future of White Collar Brawler early next year. The show’s first season was funded in part by an outside investor. Houghteling said that at this point, he’s more interested in sponsorships than further investment.