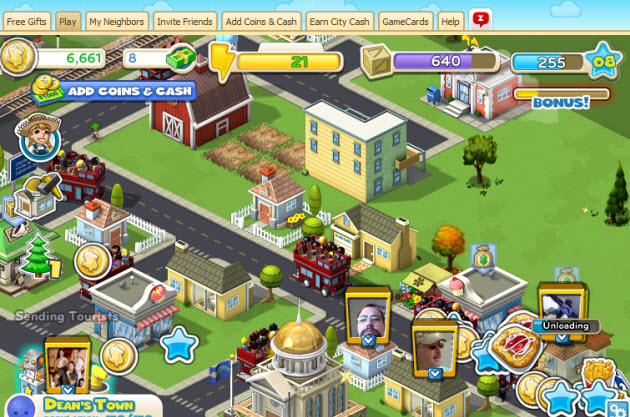 If it does that, CityVille would not only be the fastest-growing game in history. It would also be the largest game being played today, certainly on Facebook and perhaps on any platform. That’s a pretty astounding achievement for a game that can be described as a social knockoff of SimCity.

The urban simulation game has some important differences that make it so viral. You can visit the cities of other players as tourists, helping their cities thrive. You can also open up your own business franchises in your friends’ cities. So the players benefit by being more social, and that helps it spread.

The graphics in the game are still primitive by video game standards, but for a Flash game they aren’t bad, with little people constantly walking around the streets, translucent clouds blowing overhead, flags billowing in the wind. Those effects create a felling that your town is alive and bustling with activity.

The game also has built-in motivators to keep you playing the game. For instance, when you plant strawberries in a field, you can harvest them in just five minutes. That means that you’ll get an extra reward if you stick around long enough. FarmVille’s fastest-growing crop, by contrast, takes two hours, which leaves users without much to do in between harvests. Normally, people play Zynga games for 10 minutes at a time. So anything that gets people to stay around longer has good effects on the game’s overall usage.

Zynga has also been heavily advertising the game and cross-promoting it with its other games, which reach more than 245 million monthly active users on Facebook, according to AppData. The real question for Zynga will arise when it grabs all of the current Zynga players. Will growth peak, as it did for FarmVille? And will the players who stick with the game actually purchase anything?

Zynga’s games, unlike most traditional video games played on consoles and PCs, are free to play, in the tradition of other Web-based casual games. Users pay real money for virtual goods such as tractor fuel in FarmVille or energy in CityVille and FrontierVille. Those purchases allow you to perform actions, like harvesting a field or collecting income from a store, in the game more quickly than you otherwise could.

If there is anything holding the game back, it seems like it’s Facebook’s platform itself, which is loading pretty slowly for me. For instance, if I want to hire friends for my buildings, the game has to consult with my Facebook friends list. When it does so, it crashes. That’s a problem with Facebook, not the game, based on my understanding.

But that tie to Facebook has also been essential to CityVille’s growth. Inside Social Games reports that the reasons for the game’s success include cross-promotion, international users, relatively high production values (at least for a Facebook game), Zynga’s expertise at working the Facebook platform, and the re-introduction of game notifications in Facebook’s interface.

To put the growth in perspective, it took FarmVille more than three months to hit the same numbers as CityVille has now. FarmVille peaked in the spring at around 83 million monthly active users, right about the time when Facebook cracked down on games sending too many communications to users. Still, it had about a nine-month run of positive growth numbers before it hit its plateau.

If all of the CityVille growth comes at the expense of FarmVille and FrontierVille, then Zynga won’t profit as much — but it can content itself in knowing it’s retained users who might otherwise have grown bored with its existing games.