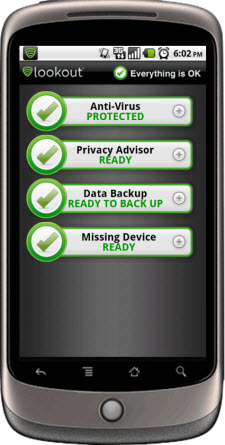 There’s a gold rush going on in security investments, and Lookout Mobile Security is cashing in on it. The smartphone security company is announced today it has raised $19.5 million in a third round of funding led by Index Ventures.

Security investments have been hot for a while since it’s clear that, with the daily reports of malware attacks, users still need a lot more protection when it comes to cruising the internet. Lookout is positioning itself in one of the hottest parts of the market, mobile security.

San Francisco-based Lookout has seen its app grow from 100,000 users less than a year ago to more than 4 million today.

Many of those users download the free version of the app on the Android, BlackBerry or Windows Phone 7 platforms. But the company is having success upgrading users to a $3-a-month premium service that includes features such as Privacy Advisor, data backup, and missing-device locator, said John Hering, chief executive of the company, in an interview.

“Smartphones are the next computer for billions of consumers and it’s clear that, just as in the PC world, consumers and their phones need protection,” said Volpi.

During the past year, Hering said his company has seen mobile threats multiply from about four per 100 users to more than 10 per 100 users. The incidence of attacks aren’t as bad as they are on PCs yet, but they are growing.

One recent attack hit more than 1 million cell phones in China and resulted in $300,000 in damages per day. And a Trojan Horse attack disguised as a “movie player” app was released on the Android Market; it sent premium text messages and charged a user’s phone bill without notification. Also, in November, flaws in banking apps exposed the security of iPhone and Android users.

As for the gold rush, Hering said he believes that mobile security just set up its foundations as a business in 2010 and is poised for faster growth in 2011.

Meanwhile, global smartphone sales in the third quarter were up 96 percent from a year ago. With hundreds of thousands of apps, it’s harder to screen all of them properly. Hering noted the recent Wall Street Journal investigation that found lots of mobile apps routinely violate privacy policies by sending your phone’s data to advertisers.

The Lookout Privacy Advisor can protect users against that, he said. Lookout has been chronicling all of the things that apps do in its App Genome Project, largely because of concerns about what kinds of things apps do without notifying users.

“In the last six months or so, consumers have started to become aware of the privacy and security issues,” Hering said.

Lookout’s app is now on more than 400 mobile networks in 170 countries. But it still isn’t on the iPhone. Hering said the company is watching the iPhone closely and is encouraged at Apple’s recent relaxation of restrictions on apps.

Lookout’s introductory video is below.