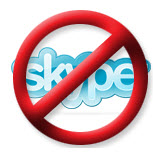 Skype suffered a widespread and lengthy outage today with its Internet calling service.

The company said in a post that problems with the Skype network’s “supernodes” are responsible and could take hours more to fix. Skype apologized to users. But the lesson is clear, as GigaOm noted. If you rely as a business on cloud-based communications tools, it pays to have a backup.

Skype spokesman Peter Parkes said, “Skype isn’t a network like a conventional phone or IM network. It relies on millions of individual connections between computers and phones to keep things up and running.” That is, Skype uses a peer-to-peer model in order to connect callers.

The supernodes are like phone directories for Skype, and a number of them failed today. As we speak, Skype isn’t loading for me right now. Lots of people are affected. Skype accounts for 0.57 percent of all Internet traffic. For the first six months of 2010, Skype logged 88.4 billion minutes of Skype-to-Skype calls.

[update: Skype said in a tweet that it is now returning to normal]