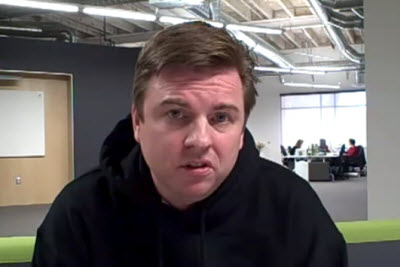 Tony Bates, the chief executive of Skype, posted a YouTube video today explaining what the company is doing to fix the outage that brought down Skype communications for tens of millions of users.

He said the company has been working hard to restore communication for all of its users who were hit with the outage in the past 24 hours. Skype offers free internet calling between users and a paid service for those calling regular phone networks.

He said that usage has been restored to about 16.5 million people, which for this time of day is about 80 percent of normal. Users on the U.S. East Coast and Europe are fully restored.

Also the instant messenger, video and audio services are back up. But offline instant messenger and group video calls are taking longer to bring back to normal. Skype said the problem was caused by the failure of “supernodes,” or the directories of Skype users. Skype has had to replace those supernodes with its own dedicated servers. That means there are fewer servers to handle the group calls and other services that are still down.

“It’s been a tough 24 hours for many of you – and I’d like to thank you for your patience as we bring Skype back to normal,” he said. “I realise that it’s difficult to compensate you for not being able to talk to or see your friends, family or colleagues, but we’re planning to offer Skype Credit vouchers to all of our loyal paying customers.”

More updates are coming later today. [Update:] Bates has offered another update, saying that Skype has now successfully stabilized its service and is operating at 90 percent of normal user volumes. Offline IM and group video calling are still offline. It is also offering 30 minutes of free calling to landlines anywhere in the world.