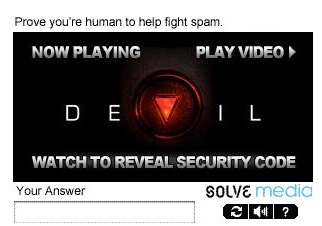 Even if you don’t know what they were called, you’ve probably been annoyed by Captchas — the often distorted letters and numbers that websites sometimes ask you to enter. Well, a startup called Solve Media wants to make that process a little less painful, while also creating a new moneymaking opportunity for websites — and it just announced a new ad format.

Captchas help sites ensure that the person creating an account or purchasing an item is a human being and not some kind of automated program. The problem is that programs have become more sophisticated about scanning Captchas and picking out the codes, so the Captchas have to do more and more to distort them. The end result? Codes where I have to keep squinting and wondering, “Is that an ‘I’? Or a ‘1’? Or an ‘L’?”

Solve Media, which is headquartered in New York City, solves that problem by replacing regular Captchas with ads. Instead of forcing users to decode arcane codes, you just enter an easy-to-understand brand message or slogan.

Advertisers, meanwhile, get a captive, engaged audience — you have to look at the ad, and not only do you have to read the message, you have to type it in. And websites suddenly have some extra ad space.

Today, Solve Media made a new format available to advertisers — 15-second videos. Solve already ran a campaign for Universal Pictures’ movie Devil, where users watched a short commercial for the film and entered the text message that played during the video. You can watch the ad here.

That’s right, the advertisers can now play a video that you really can’t ignore — at least if you want to accomplish your goal. From a user’s perspective, I might even call it brilliantly evil, except that I’d rather watch a short ad than squint at another Captcha.