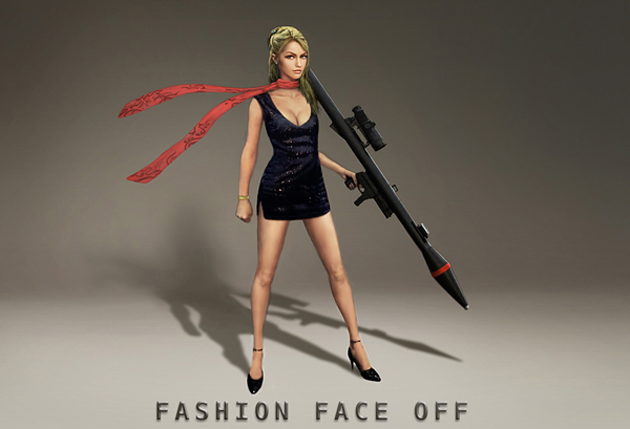 Sometimes crazy ideas for video games turn out to be hits. That must be the logic behind Real Life Plus, a startup game studio that’s making two interesting new Facebook apps, Style Studio and its companion game Fashion FaceOff.

As you can tell from the image above, this one involves hot girls and guns, sort of like Call of Duty meets Project Runway. Or, if you’re into games for women and girls, Stardoll meets Sorority Life. The company is coming out of stealth today and is one of those rare ventures that aims to create a game that both sexes will like. 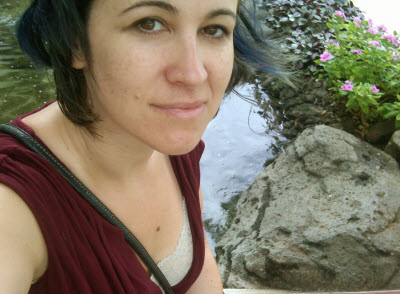 You create your designs in Style Studio, an app that will be available on the web or on social networks such as Facebook.

Then you show your fashion designs off in the Facebook game, Fashion FaceOff, where you compete against other designers in a kind of gladiator’s arena. If you lose, you’re eliminated with deadly weapons, such as the rocket launcher shown above.

In Fashion FaceOff, users are the judge, jury and executioner for would-be fashion designers. If you’re talented, you can rise through the ranks and buy toys such as flamethrowers to destroy unworthy designs.

It may sound like a dude’s fantasy. But the founder and chief creative officer of the Emeryville, Calif.based company is a woman, Terry Redfield (pictured right), who has a mix of male and female video game veterans on her management team. 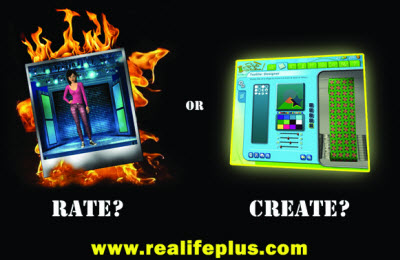 If Fashion FaceOff sounds a little crazy, Style Studio is more conventional. You can employ easy-to-use tools to create 3D fabrics, clothing and outfits. You can take Polaroid-like snapshots and put them in your portfolio. Then you can enter your designs in the Fashion FaceOff. If you hate a design, you can literally flame it with a flamethrower. If one of your own outfit designs gets flamed 50 times, you get an achievement badge of Asbestos Underwear.

“I wanted to create something easy enough for my mom to play, yet cool enough for my 15-year-old nephew to try,” says Redfield, who started the company with co-founder St.John Colón. “My goal is to make applications and virtual spaces that all tie together into one exciting experience.”

You can download the apps now on the company’s web site. But they will also be available on Facebook, MySpace and the iPad.

Redfield’s team has a lot of experience making games and social media. They’ve worked on games such as The Sims 2, Resident Evil, Toy Story, Tomb Raider, Psychonauts, SpongeBob Squarepants and Madden NFL Football. Redfield started working in online communities at age 15 and worked at game companies such as 3DO and Double Fine Productions. Throughout her career, she has straddled the traditional game and casual game businesses. Colón has worked on games that have sold more than 17.7 million units at companies such as Square, Warner Bros., Nickelodeon and Disney/Pixar.

Other key folks are Roselyn Romberg, president and chief operating officer; Dennis Harper, technical director; and animator Tara Packard. The company can create high-quality 3D animations because it uses the Unity Engine from Unity Technologies, which can create 3D graphics running inside a web browser.

The company was founded in 2009 and has 10 employees. Rivals include fashion-oriented games and virtual worlds such as Gaia Online and Second Life. Advisors include game veterans Ed Fries, former head of Microsoft Game Studios, and Robin Harper, head of marketing at Playdom and former executive at Linden Lab.

The company has raised $120,000 in angel funding and is raising a round of venture money. Here’s a concept video for the game below.