As my Facebook friends and coworkers are tired of hearing, I’ve been on a serious fitness kick over the past year and a half, having lost 83 pounds. But I now have a new problem, and I admit it’s a pretty good one to have: My current set of fitness apps, geared around watching calories and tracking workouts, don’t seem ready to take me to the next level.

That’s why I was pretty pumped to hear about Gain Fitness, a new workout-recommendation site from former Google and YouTube employee Nick Gammell. Currently, the site offers randomized but scientific workouts that you can customize based on your experience level and available equipment.

The fitness industry is a $120 billion-a-year business. So there’s money to be made in the margins by making it more efficient, social, and data-driven. Gain’s service is aimed at regular exercisers who already hit the gym two to five times a week, but get frustrated at their lack of progress and the time it takes to both plan and track workouts. The notion of the site’s Quick Workout is that Gain Fitness can take out the time it takes to think through and plan a workout, while using principles of exercise science to design a sensible routine. Gammell estimates this demographic includes 50- 60 million people in the United States alone.

I certainly fit in that group: I’ve taught myself a fair bit about exercise and work out with a personal trainer but don’t consider myself an expert. When I clicked through Gain’s Quick Workout generator to show a workout I could do at home, what I saw both felt familiar and in my range of capabilities, yet seemed appropriately challenging — decline pushups, bodyweight squats, planks, and so on. (Gammell’s cofounder, Sam Morrell, is a certified personal trainer, while Gammell is a former college football player.)

There’s a host of fitness apps and websites out there, from DailyBurn and LoseIt to two personal favorites, MyFitnessPal and GymGoal. But Gammell hopes to harness his quantitative background — he was a financial data analyst at Google — and today’s sophisticated social networks to take online fitness to the next level. His plans for the site include public profiles, workout sharing, and social challenges. (Another site I’ve started using recently, Social Workout, already lets people create and join challenges and share them on Facebook, but doesn’t have Gain’s workout-generating function.)

What I’d really like to see is a way to tie more of these sites together. Just as location-based services have started to cooperate on place databases and check-in data, fitness sites should be able to share food diaries, calorie expenditures, and workout plans among themselves. Gammell agrees and said he’d like to be part of that move.

Gain Fitness, formerly known as eFitPlan, has raised $80,000 from friends and family members. Google executive Ben Ling, who’s well-known inside the tech business for his brutal workout regime, is an advisor to the company.

Gammell’s not just CEO of the company, he also uses the product — and offered this before-and-after photo as proof. As I joked with him, most people would consider themselves lucky if his before was their after, but it shows there’s an opportunity for fitness apps that go beyond the basics. 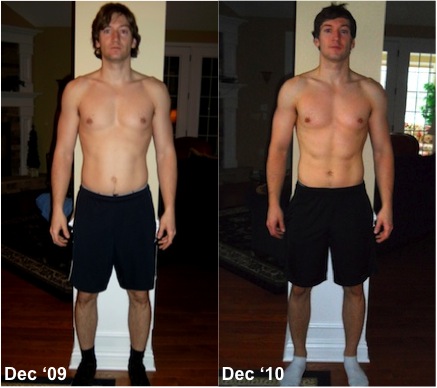 And here’s a presentation Morrell and Gammell gave at the Quantified Self, a workshop for fitness-tracking aficionados: