It was Christmas 1996 when I opened up the Sega Saturn console and a copy of Bug!  I was pretty excited about Bug! for some reason, probably the box art, so I thought I'd play it first.  (This was the year the Saturn came packed with 3 pretty good games.)  I got the wrapping off the box, and opened up the case. 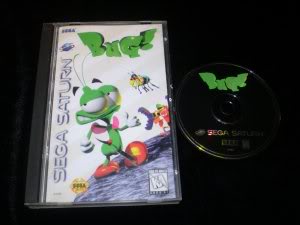 I like to think I looked at the CD for a second before reaching to pull it out, savoring at least a few happy moments before I broke it, because this was the first time I had opened up a CD case in my life, music or otherwise.  It was all Super Nintendo cartridges and cassette tapes before this.

But eventually I went straight for the edge of the disc to try and yank it out of there.  I made several attempts to get it out this way with no luck.  Then, with the family in the room, though preoccupied with their own gifts, I decided it was coming out one way or the other, so I pretty much just pulled harder, splitting the disc.  (It never occurred to me to put my thumb in the middle and take the disc out that way.)  Everyone looked at me, but I played it off like nothing was wrong.  Part of me still thought the disc might work, so I stuck it in.  Of course, the Saturn went straight to the CD player and that cool ship that would fly through space.  I"m pretty sure there was a prompt on screen that said no disc, but it's been a while since I messed around with the Saturn's menu.

So everyone in the family tried to navigate through the Saturn's menu to make it work, but nobody could.  I took the broken Bug! disc out and put in Daytona USA.  To this day, I have never played Bug! and have always wanted to.