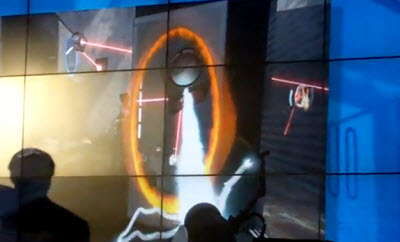 For years, Intel’s integrated graphics have been the bane of PC games. The graphics on Intel’s chip sets were so poor that they couldn’t support high-quality 3D games.

But Intel’s latest Sandy Bridge chip, which combines graphics and microprocessor functions on a single piece of silicon, has about 25 times the graphics quality of its chip sets from five years ago. The result is that it can play high-end games, such as Valve’s upcoming Portal 2 game for the PC. Releasing in April, Valve has primed its game, a sequel to a hit indie game, to run well on Sandy Bridge.

But rivals Nvidia and Advanced Micro Devices say that Intel’s Sandy Bridge, officially released this  week, is still fairly week on high-end graphics. It can’t, for instance, support DirectX 11, the latest version of Microsoft’s games standard. Enter Gabe Newell (pictured above, left), chief executive of Valve, who said that Sandy Bridge is great for the PC game industry because it preserves the PC as a cool game platform. Mooly Eden (pictured above, right), a senior executive at Intel, also showed World of WarCraft: Cataclysm, which was released in December, running fine on Sandy Bridge. Check out the video below of Portal 2 running on a Sandy Bridge machine.