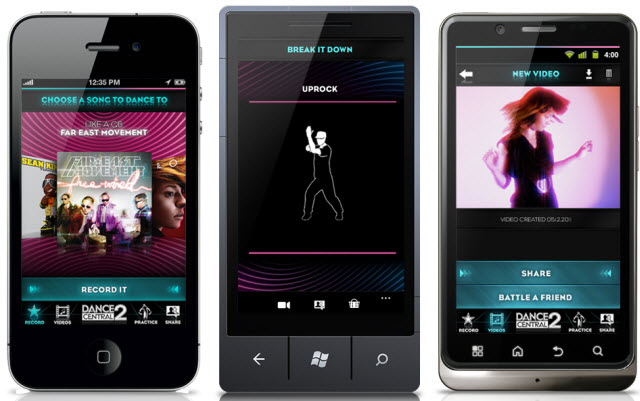 Digital ad agency AKQA has created a novel new app called Dance Cam to promote the Dance Central 2 game that works with Microsoft’s Kinect motion-sensing system for the Xbox 360. The mobile app is designed to showcase new songs, new moves and features of the game while letting users create their own studio-quality music video.

Users can record themselves doing dance moves to some of the biggest dance hits from stars such as Enrique Iglesias and Sean Kingston. The app is a way to extend a console game and get more interest for it by spreading the word on fast-growing platforms like the iPhone.

After you select a song, a second person films you for 15 seconds via your mobile phone camera while the dance song is playing. You then select “dancify,” which uploads the video to a virtual instance of After Effects, which is located in the Windows Asure cloud. That dynamically renders the video with custom visual effects and syncs it to the beat of the song. It returns a 30-second remixed video. After you watch the video, you can connect via Facebook and share the music video and challenge your friends to a dance battle. If your friend accepts a battle, two videos are joined into one and your friends are invited to vote on the best dancer.

AKQA, an independent digital ad agency, dreamed up the app as part of its job doing all the digital marketing for the Xbox group at Microsoft. AKQA has created other branded mobile apps such as Nike Training Club, Heineken Star Player, Fly Delta and more.

The app works with Windows Phone 7, Android, and Apple iOS devices. Getting it to run on all three platforms at once is a decent technical achievement, though the timing might have been better if this had launched with the Dance Central 2 console game in the fall.