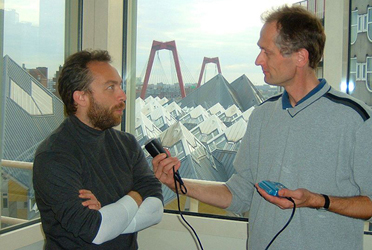 I'm extremely comfortable with one area of video-game journalism: the interview. The challenging part isn’t conducting them; it's setting them up in the first place.

My experience is that if you’ve met the subject at an expo or conference and have their business card, you can get through to them. But recently, I contacted a subject to ask if they’d be willing to comment on a feature I’m writing, and while they answered immediately in the affirmative, they had to get a sign-off from PR before we could proceed.

I’ve written on Bitmob before about how PR shields developers from the press, but the degree to which it closes access to video-game journalists is remarkable. It’s nothing insurmountable, and I have to guess that the bigger and more established the outlet you’re writing for, the easier it is to land that killer interview. A professional journalist once told me “No one cares about who you are. They care about the outlet you’re writing for.” Yet I’ve heard of wildly popular and well-regarded websites whose writers still have trouble getting through the PR net.

The existence of that net makes sense, and I understand the necessity — to a point. The prevalence of sensationalist games journalism makes developers and publishers hesitant, and they like to make sure that who they’re speaking with is legit. But when speaking to a journalist actually interests the subject, requiring a sign-off from PR seems excessive.

You can’t tell me that Cliff Bleszinski doesn’t help sell games with all the publicity his boisterous personality commands, or that Ken Levine's willingness to regularly engage with the press doesn't inspire curiosity about his products.

Furthermore, practice makes perfect. It’s no wonder a dearth of interesting game-development personalities exists. If PR handlers don't allow developers a chance to speak out more often, is it any surprise that they don't feel comfortable doing so? Bleszinski and Levine have had enough chances to address the press that they’ve become quite good at it and are entertaining public speakers. That isn’t to say I expect all developers to have that ability, but surely some central figures in development at every major studio have the personality and desire to engage with an audience through the press. I wonder how often they simply don’t get that chance because PR closes the gate on them.

When we see criticism of the video-game media for not involving developers, remind yourself that a journalist might fail to do so through no fault of their own.

My feeling on how to address the situation is to consider whether we’re being fair to developers when we do get access to them. “Gotcha!” games journalism is something I’ve heard more about than I've seen, but developers must have reasons to see us as the enemy. Getting scoops is exhilarating, and entertaining your audience is an absolute requisite for this job. Take a look at Michael Thomson’s recent interview with Homefront’s Lead Level Designer Rex Dickson. It's not a softball interview, but it’s respectful and damned interesting.

Thomsen’s interview is precisely the kind of interview we need to see more of. If that’s what future games journalists here on Bitmob produce when they get their shot, it will go a long way toward allaying the fears of PR. It will also give developers the spotlight I think they deserve — if they’re willing to step into it.

Dennis Scimeca is a freelance writer from Boston, MA. He has written for The Escapist, Gamasutra, and @GAMER magazine, and he maintains a blog at punchingsnakes.com. Follow him on Twitter: @DennisScimeca. First Person is his weekly column on Bitmob concerned with questions around the video-game industry and the journalism that covers it.