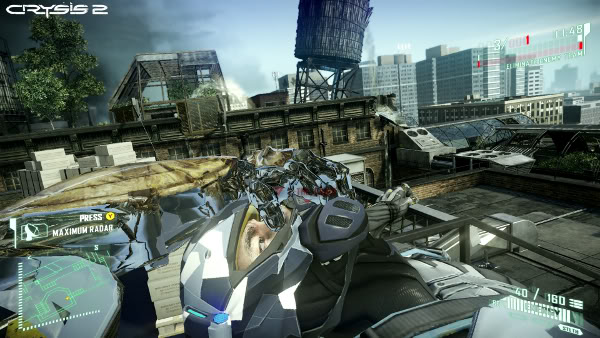 A state-of-the-art cybernetic suit has its privileges, but it's also one greedy attention whore.

I'll keep this one short. First-person shooter Crysis 2  touts its ever-present Nanosuit as a harbinger of a new level of dynamism in a genre stagnated by rehash after rehash. Invisibility on demand, reactive bullet deflection, bone-shattering strength amplification…the list goes on, but you get the idea: The Nanosuit is one kick-ass piece of hardware.

But there's a problem: The Nanosuit is a little too cool.

Don't get me wrong. The Nanosuit is far and away the star of this particular show. But as a dedicated shooter gamer who has seen his fair share of superficial gimmicks over the years, I find myself increasingly favoring the simple heft of a weapon in my digital hands and the cacophonous music of bullets being traded across the combat zone. 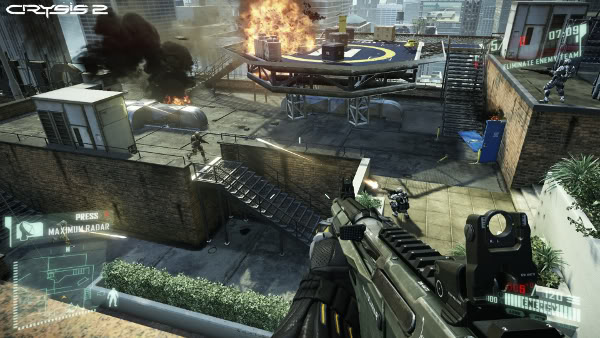 A Nanosuit in experienced hands can be deadly. But so can a pistol. Or a sniper rifle. Or even a rocket launcher. Unfortunately, my time with Crysis 2's multiplayer demo rapidly devolved into furious wrangling sessions with my suit's capabilities, as I mistakenly believed that not constantly employing its features would hinder my performance.

Ultimately, I wound up ditching any serious attempts at mastering the Nanosuit, and instead focused on traditional shooter tactics of effective cover and optimal bullet dispersion (read: headshots).

And you know what? I still had a blast.

Epic Games Design Director Cliff Blezsinski — whose guidance has shaped some of the most popular shooter titles ever — recently Tweeted his astonishment at "the sheer amount of features that a shooter needs to be competitive these days." Passive-aggressive jab at his peers notwithstanding, Blezsinski touches upon an important factor of contemporary shooters: Their predilection to bloat themselves to the breaking point overshadows the good-natured fun of just blasting each other with guns — which, by the way, is essentially the backbone of the genre. 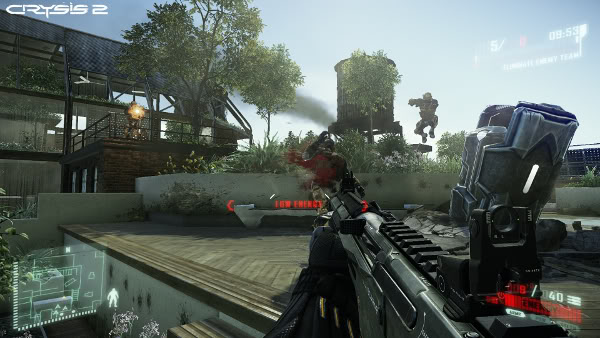 But that doesn't mean I'm in full agreement with Blezsinski's "if it ain't broke" stance on shooters. By all means, this kind of gaming can definitely benefit from new ideas and concepts — but it only works within a limited purview. The Battlefield series has vehicles, the Call of Duty series introduced us to Perks and Killstreaks, and Counter-Strike players traded cash for upgraded arsenals. But in a universal sense, it's the actual weapons that simultaneously serves as the genre's icon and as its workhorse, and it's the weapons that withstand the test of time.

Because in the end, no matter how invisible or armored you become, you still have to pull the trigger.