(Note: If you are not familiar with the article from which this piece draws inspiration, Hunter S. Thompson’s “The Kentucky Derby is Decadent and Depraved,” you absolutely should be. Also, this piece, umm…contains language.)

I got off the S. S. Anne already weary and exhausted, entirely ill-prepared to begin my journey. The air in Vermillion stank of ozone and animal feces — I had been told that the gym leader and de facto mayor of this frighteningly manic settlement was a bit of a barmy fellow. Apparently he couldn’t be bothered to find someone to shovel Raichu shit off the sidewalks.

I didn't exactly relish the thought of meeting with him the next morning. But I had a story to write — my job was to find the mysterious Pokémon trainer Red and find out what he’d been up to since slipping into obscurity after his defeat of the Elite Four. 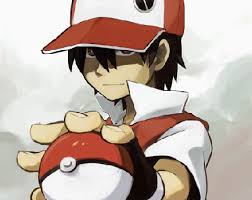 There didn’t appear to be much to this seaside town other than the obligatory Hospital and Gym, so it took me a mile or two of weary trudging before I found an inn. I was exhausted — I refused to let the Machokes from that rusty oil barrel of a ship carry my bags. They were too human — they just plain creeped me out. Fortuitously enough, this inn prohibited the battling of Pokémon, so it seemed that for the first time in a little under a week I might get my full eight hours.

As I was a child of the metropolis, the creatures the demented inhabitants of this faraway land call “Pokémon” were not unknown to me, at least in the intellectual sense. And so it was that along with my boarding pass for the ship I was handed a shiny red and white sphere. I was not exactly excited to be in close proximity to one of these beings — I tried to imagine what being trapped in some sort of trans-dimensional ball for indefinite periods of time might do to my psyche, and I found myself too terrified to release him from his prison.

I clipped the ball to my belt and didn’t think much of it for the first few days of my cruise. Thoughts of a looming deadline dominated my mind — my fat editor’s brow furrowing, beads of sweat hitting the polished mahogany of his desk as he railed at me about my penchant for submitting material just in time to get printed but not early enough to be edited, and how my receipts from Kanto had better not come back with exorbitant bar tabs or rental car insurance claims. I hated him. 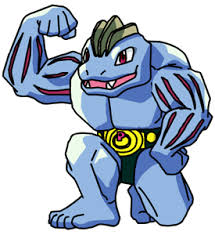 Would you let this thing carry your luggage?

All of this ran through my mind as I tried to fall asleep, but the bugger in the room next to mine evidently couldn’t get his small turtle-slave back into its ball. As much as I wanted to sleep, I found myself rooting for the little blue bastard. The sun was already coming up before that misbegotten creation stopped repeating its own name, ad nauseum. I thought about trudging over there, kicking the door in, and seeing just what the creature in my charge was capable of, but I decided against it. This was going to be a long assignment.

Tracking down my quarry

Getting into the gym was absolute hell. Just inside the door I noticed some hippie wearing a kimono and sunglasses. He was leaning against a statue of some unrecognizable creature, and judging by his slow back-and-forth sway, I had pegged him as someone nursing a massive whiskey hangover. That was, at least, until he saw me. The speed and psychosis with which he honed in on my presence and closed the distance between us made everything clear: He was clearly tweaking on something.

Get that hippie freak away from me!

“Hey! You! Champ in the making! What are you doing in here?” I knew that I had to handle this delicately. There was no telling if some improper breach of etiquette might set this man off on a bloody rampage.

“Are you a trainer?”

“No, I’m a journalist.” The man’s brow rose impossibly high at my admission. Clearly he wasn’t buying it. This was unfortunate for me, as I was anything but a liar.

“Journalist? Then what’s that ball on your belt, huh?”

“My editor gave it to me. Said I might need it.”

“Well, he was right!” He looked me up and down disapprovingly. “What sort of rag do you work for?”

I fixed him with my worst look of disapproval. “Pokémon Playmates.”

“Look. My editor is a personal friend of Lt. Surge. They fought in the war together. I’ve got an 8:00 appointment with the old bastard, and I’m not going to be late!” 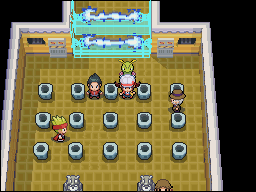 Look at all those freaks in their trash-can-strewn pleasure den!

He turned and walked away from me, and that was when I saw the utter disaster that was somehow an official Pokémon League-sanctioned gym. An incredibly unnecessary number of garbage cans littered the expanse of the room, but that wasn’t the most startling aspect of this unholy environment. Human beings slumped in bizarre positions throughout the room — possibly needle freaks, obviously junkies of some sort. I followed the hippie as he zigzagged across the room, rummaging through the refuse.

“Lose your favorite needle?” I asked.

He apparently didn’t find this funny and kept muttering something about “secret switches.” As he dug his way through the bottom of the last container there was an audible click in the back of the gym as a door slid open to a frightening cacophony of sounds. Lights flashed as sparks lanced across the room, and I could see the telltale sign of rodents skittering back and forth across the scarred wood floor. Above all, however, were raucous cries of ecstasy.

The source of the moans was none other than the gym’s leader, Lt. Surge. The man was lying back on a mat, bare-chested and legs covered in old combat fatigues. Were he not writhing on the floor in the fits of some freaky fetish, I might have liked him.

“Dear god, man! What are you doing?!” My warning was cut off by a yellow rodent scurrying madly up Surge’s leg, digging his claws into the man’s abdomen, and delivering a shock that was a hundred thousand volts if it was one. Surprisingly, the man somehow avoided being killed and crisped instantly.

Back in his prime, before the electricity addiction.

Instead, he bellowed one of the most unsettling noises I’ve ever heard produced by a human being and collapsed on the floor in a heap. The little yellow rat scurried away into a corner somewhere, presumably to nurse its undoubtedly wounded psyche.

I kept waiting for Surge to sit up, but all I was privy to was the rapid rising and falling of his chest. The closed-door pleasure-den antics of a Kanto gym leader, though possibly worthy of print in their own right, were not my story. I nudged him with my boot.

I had grown tired of waiting. I knew of a collection of delusionals around the corner known as the Pokémon Fan Club. Surely they, or possibly someone at the Pokémon Center, could tell me where to go. I decided to leave this sad, sorry heap to his own devices. I turned around to spit on him, but he had miraculously vanished. When I turned around, he had already grabbed me by my shoulders.

“Where are you going?”

“Well, how is the old bastard?” 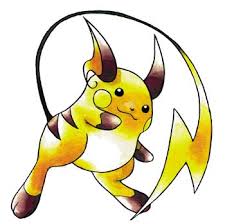 Clearly I wasn’t going to get out of this one. But as long as he was up and about instead of lying dead or comatose on the floor, I supposed I could humor this freak for a few minutes, provided he told me what I needed to know.

This was greeted with a much bigger laugh than I expected. That yellow rat’s jolt had knocked something loose in this freak’s brain. I needed to be on my toes.

“So, you’ve come a long way. What can I do for you? I see you’ve got a Pokéball there. Do you want to battle?”

“No, no. I’m just here to write a story on a famous trainer. Goes by the name of Red. Do you think you might tell me where I can find him?”

At this, his jittery, seizure-like movements ceased, and he became eerily somber.

“Well, yeah. Fiercest trainer I ever went toe to toe with.”

“But you guys don’t even have Pokémon where you’re from! What do you care about Red?”

“Look, man. I just cover the stories that old bastard friend of yours assigns me. You going to tell me where this Red guy is or not?”

“I don’t know exactly where he is. But I know where he’s from.”

After this, he offered nothing more.

“If you want to know where to go, you’ll have to beat me first.” 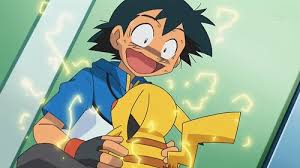 The awful fate that awaited me.

But it was too late. I could already see the trainers in the gym waking up, strange red and white spheres which were definitely not Pokéballs rolling toward me, eyes set for battle.

I turned back towards Surge, but he had completely transformed into the fierce soldier I had heard about. His small yellow rat — and one that looked like its older brother — circled me slowly. The air began to stink of ozone once again.

This was not going well.

Tune in next time as our intrepid reporter tries to uncover the mysterious past of Pokémon Trainer Red!