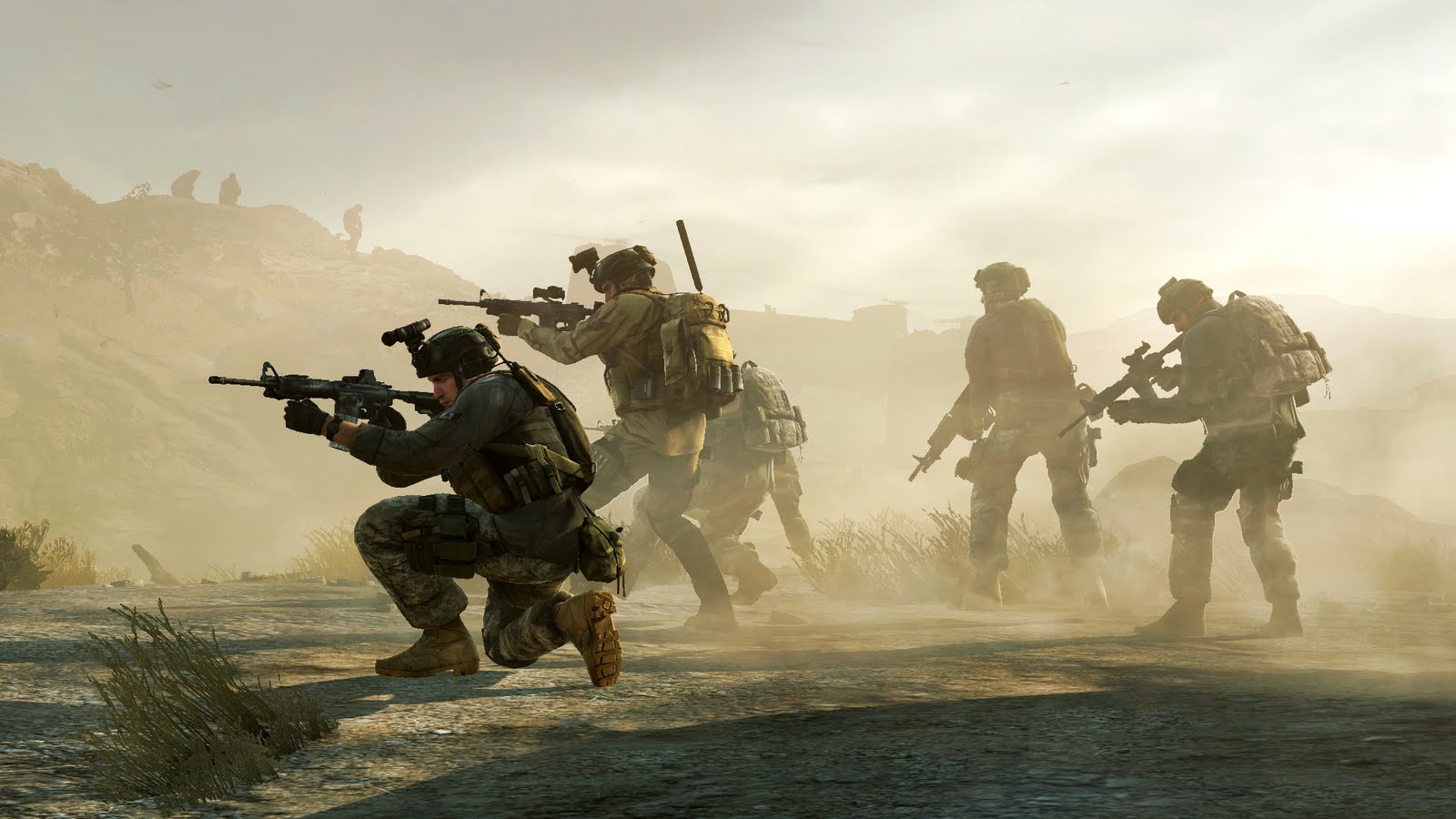 What is happening to the modern day first-person shooter?

Doing reviews for games that came out months ago has a few advantages. I get to experience the game closest to the developer's vision — post-patch updates and most (if any) downloadable content is readily available. It would seem these types of reviews come with drawbacks. What if a developer, or publisher, wants the vision of their game to have the veneer of another? Enter, the latest installment of Danger Close’s Medal of Honor. Published by Electronic Arts in what is almost assuredly a game projecting itself to be competing with Activision’s Call of Duty franchise. Medal of Honor strangles its very creative effort at every military cliche checkpoint. The online is the games’ saving grace. It hurts as I type this — knowing that same phrase has [in some way] been used on several first-person shooters of this ilk. What is happening to this genre?

With evidence surrounding a shady deal between Electronic Arts and ex-Activision employees, this gaming industry has proven itself not-only competitive, but unabashedly ruthless. The console version of Medal of Honor feels like two applications on an operating system’s background. The player is met with a simple layout of either Single Player or Multiplayer modes to choose from. One could see this as a direct and technical echoing of the Tier 1 operatives you will eventually control, but after enduring separate elongated loading times — it reeks of a rushed product. I’m not sure whose more to blame, Danger Close or EA, for releasing a game whose user interface feels like a Windows 98 executable file. 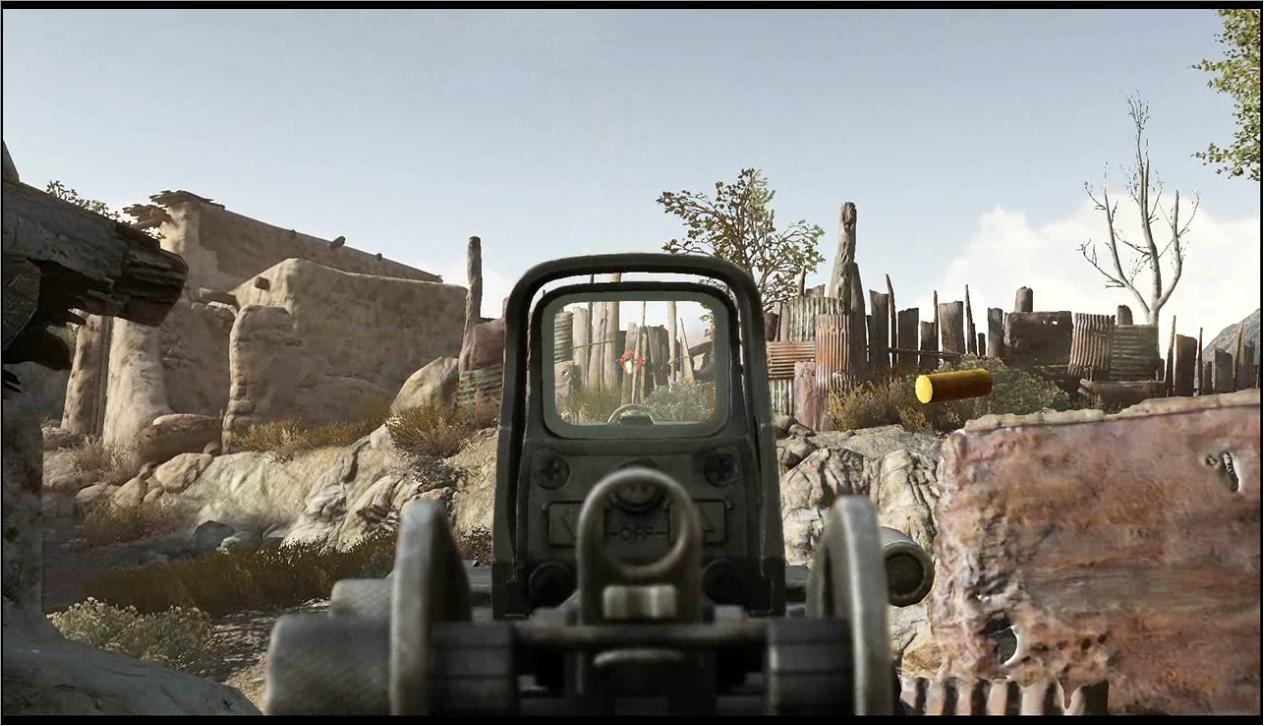 Protip: While playing in multiplayer mode, use the shadows and your iron sights to stay hidden and annoy wandering players.

Search through my previous reviews and notice that I am (at the very least) fascinated with how first-person shooters are presently being created. Or is produced a better word? This never-ending argument of whether price should factor into the value of a game, never felt so prevalent when playing such an uneven experience. The campaign and media hype of Medal of Honor definitely presented Danger Close with a great opportunity to buck the trend of lackluster single-player stories in first-person shooters. What we got was a game creatively handcuffed and mismanaged — to be morphed into the next Call of Duty as opposed to being something more. In the franchise’s heyday, it set the standard that it is now clumsily following.

Playing the campaign on normal was akin to a polite stroll in the day of Tier 1 Operators, who are directly under U.S. national command. I know this, because the game narrative shoves “just how cool” being a soldier of this caliber. At least the game’s single-player is a brief four-to-five hours long. Admittedly, there was something intriguing about playing a game that was loosely based on an actual mission. Odd how the execution unfurled. Lifeless voice acting, and set pieces at every checkpoint, made me feel less like a player having an actual effect and more like a rookie who was simply in the way. I bumped up the difficulty and the game’s flaws revealed more of itself. 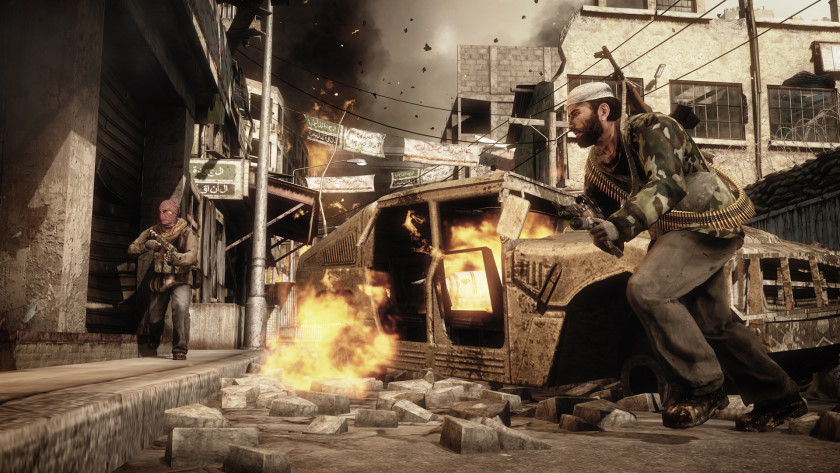 Given the controversy over changing the name of the Taliban to the Opposing Force, sensitivity to such topics could have been addressed by allowing Afghan solders to fight with Americans. Seems like a 'gimme' considering how true-to-life the story was supposedly based on.

Further twisting me out of the supposed reality I should have been immersed in, was this nagging feeling that each level was following some form of archetype. There’s a vehicle level that has odd machine gun physics. There are long-range weapons levels that essentially itemize every thing wrong with your HUD (there are moments where the objective and friendly icons never appear). Then there are the levels that imply you use your night vision, when really, you can use your night vision at any time during the game. Giving tutorials in games is very difficult while dealing with a generation that refuses to read. I still feel putting a glowing button in the middle of the action lacks some form of tact. Adding insult to an otherwise mediocre storyline, was this Call of Duty: Modern Warfare blueprint.

Much like the Call of Duty series, you play several characters from various military outfits. The realism, which is so cheaply hammered into your brain in every budget produced cut scene, is further demeaned when you choose to take an active role on missions. If you try leading your group, shooting enemies prior to a scripted event, no damage is taken. If you try playing the game by using the enemies weapons be prepared for a scant source of ammo. Medal of Honor feels closer to an on rails light-gun shooter than it seemed Danger Close had initially intended. Luckily, the rushed multiplayer that DICE worked on saves the game. Even writing this idea a second time still stings. 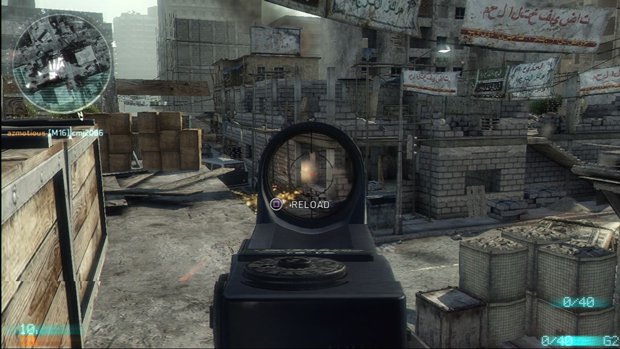 Protip: Never snipe from the same place twice. Medal of Honor maps have plenty of hiding places, but at this point players know exactly where they are. Stay low and accurate.

When you boot up the multiplayer mode you’ll notice that it loads differently — almost as if it were a separate game. There is an impression one gets when seeing a completely different layout and interface — cold sterility. DICE and Danger Close could have had Thanksgiving dinner together and you’d never get that impression from the looks of Medal of Honor. The feel of separate offices and cubicles is apparent when running around the multiplayer maps of DICE. This idea of making a Call of Duty killer (or something of the like) has produced a game that feels indifferent to the gamer’s enjoyment. No matter how dedicated each team was to producing a game for both gamers and soldiers the end result is something that feels cheap. As I type this, I’m noticing that out of the 2 million-plus copies sold there are around three-to-four thousand people playing online [on the PS3 verson].

There are several modes similar to Bad Company 2, but streamlined for three simple loadouts (Rifleman, Special Ops, Recon). There is an addictive leveling up system and kill streak perks similar to the Call of Duty franchise. A very fun mode that almost feels like a joke DICE was subtly playing on EA — “Yeah, we can do this better, but here’s the bare bones.” An interesting idea in the multiplayer that is worth a bargain bin purchase is Objective Raid. This mode forces you and your teammates to occupy enemy area for a given amount of time before moving ahead. Hoping future Battlefield games absorb some of the map vertically and the little ideas exercised in a game that feels like an awry science experiment. 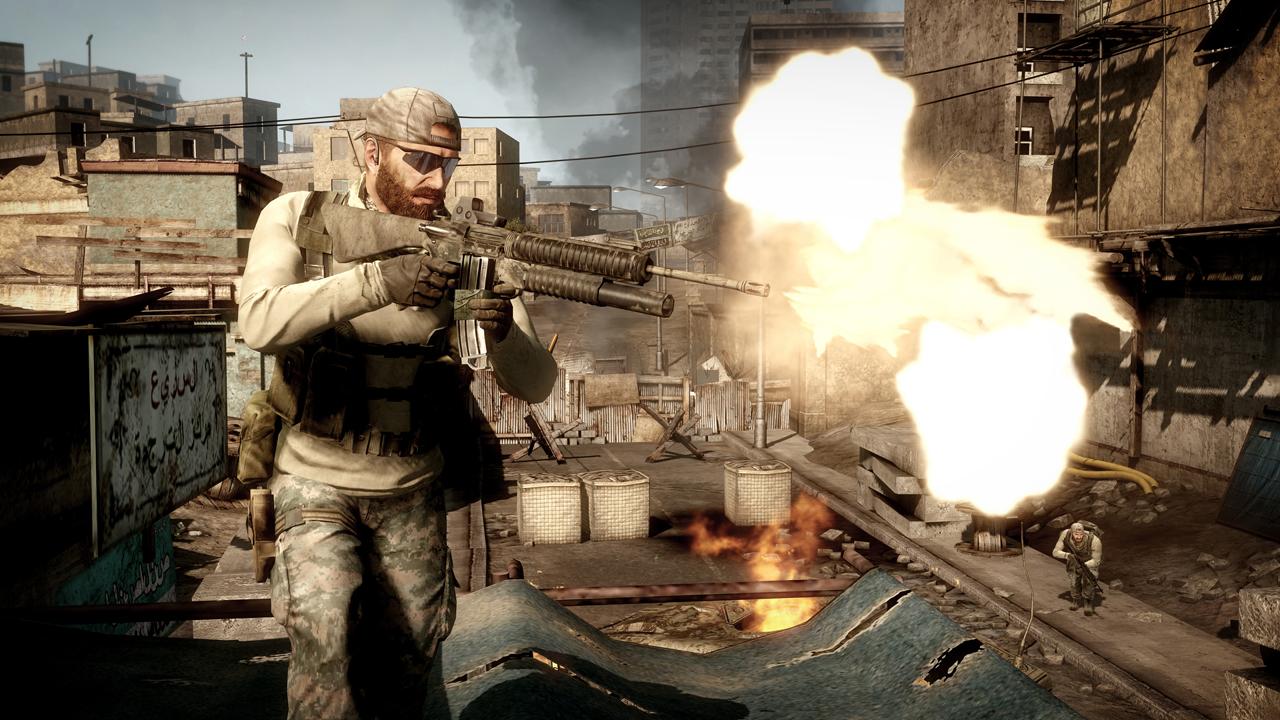 Nearing the end of the campaign, you get the sense that this game was made for troops fighting an exhausting war. Admirable, but unfortunate given the stilted story and lack of care with computer A.I.

It’s getting worse. Games that are popular beget lesser games that become somewhat popular. Medal of Honor didn’t do that bad and a sequel should be out in the next few years. A game franchise which could be held responsible for why first-person shooters haven’t advanced is currently eating its own tail. The Medal of Honor brand was good for people who loved the detailed history of war. With the very capable minds at DICE and Danger Close, there should have been an emphasis on how important a soldier’s company is. Tact and wit should have been on display in a game that seemed hell bent on proving how much better it was than that other game. Now its a franchise vacuously emulating what it helped create.

I give Medal of Honor … 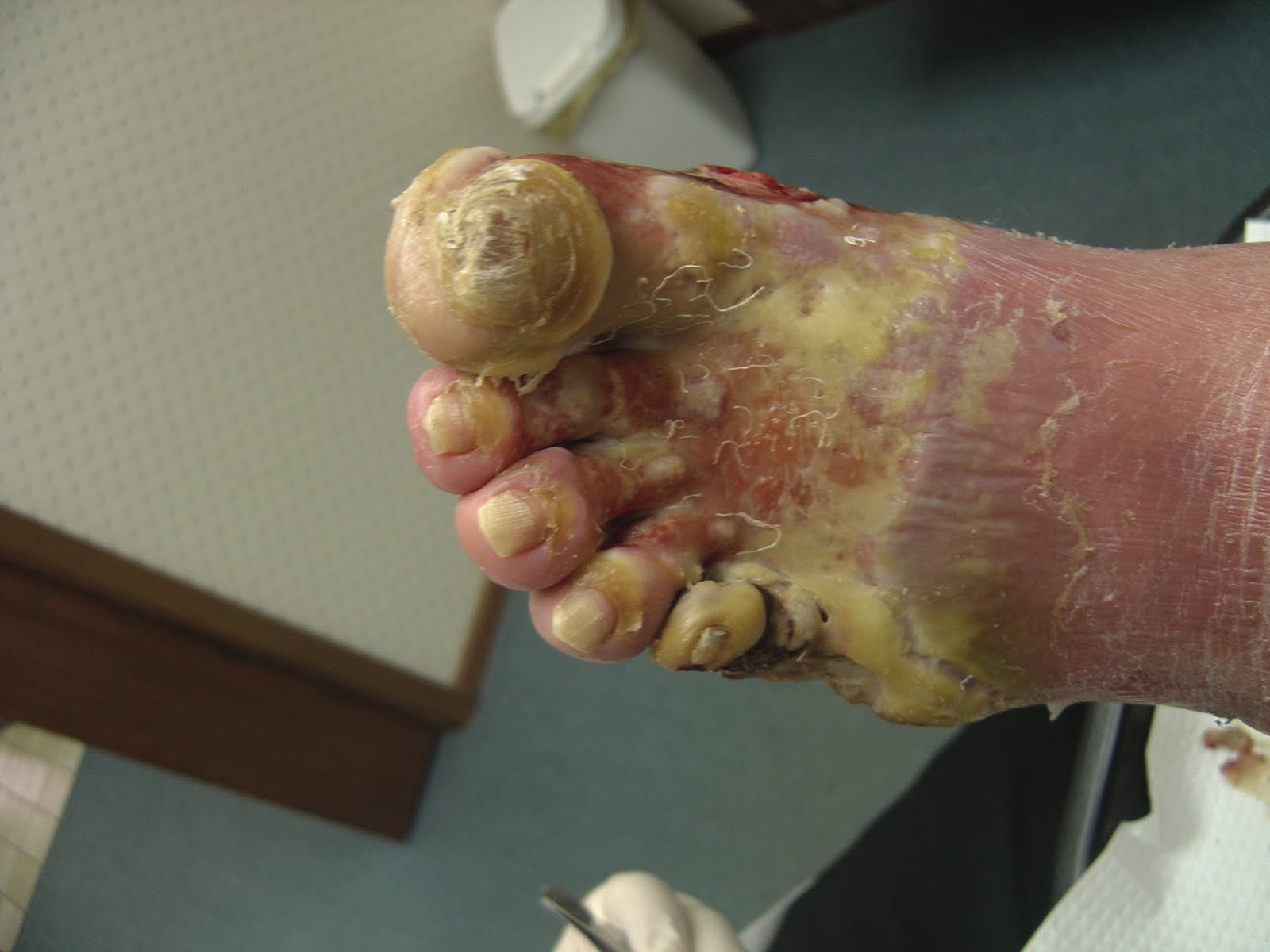 Go ahead, try and unsee this.