I was unaware of the Penny Arcade "dickwolves T-shirt controversy" until late last week when my wife brought this blog post to my attention. The author, who goes by the name "kirbybits," is a game designer in Boston, MA. She is also a rape survivor and suffers from Post Traumatic Stress Disorder (PTSD).

Kirbybits has decided not to go to PAX East this year for fear of facing numerous "triggers" —  a sound, smell, image, or other sensory input (in this case, a t-shirt) which triggers a memory of a traumatic event for PTSD sufferers. Considering PAX East is meant to be an inclusive environment for gamers to celebrate their culture, I don’t think this is something to be taken lightly.

The dickwolves controversy originated from a Penny Arcade webcomic published last year. It’s a joke about the ridiculousness of MMO quests and the idea that a player would save X number of victims from a horrible fate and then leave everyone else behind. Yes, rape plays into the humor, but I don't think it's fair to say that rape is necessarily what the humor of the strip hangs upon. 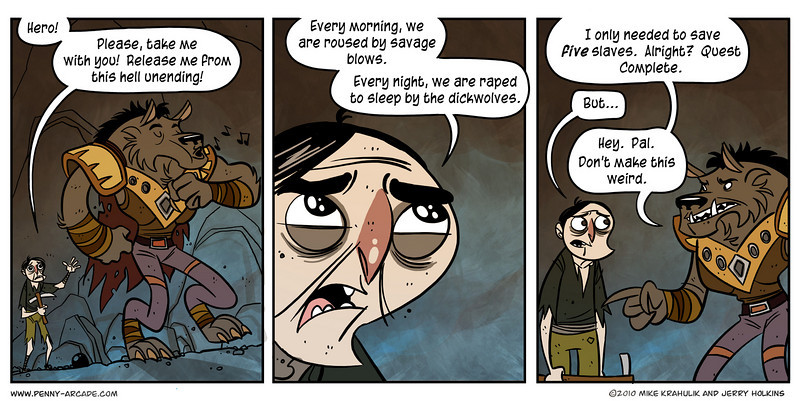 People who are sensitive to rape as a punchline nevertheless felt that this context was inappropriate and took umbrage with the strip. Their position is outlined nicely in this post on the feminist blog Shakesville. Penny Arcade's Jerry Holkins and Mike Krahulik then responded with a second comic. In the accompanying news post, Krahulik expresses his disbelief that anyone would be offended by the original strip, especially if they were Penny Arcade fans. In the minds of their critics, this was an inadequate response and betrayed the fact that Holkins and Krahulik clearly didn't understand what they were upset about in the first place.

It was after publishing this second comic that Penny Arcade decided to print and sell “Team Dickwolves” T-shirts. By this point the controversy had developed enough that the shirts were considered a slap in the face by anyone who’d been offended and a bona fide trigger for some rape victims.

Which brings us back to kirbybits and her post. Shortly after it began garnering attention, Penny Arcade removed the dickwolves T-shirt from their web store. We’ll never know precisely why this decision was made barring an official statement from PA. Either Krahulik and Holkins had an attack of conscience or the right kind of external pressure was applied.

The situation then went completely off the rails, with Twitter accounts created explicitly to call for sexually assaulting kirbybits for her role in getting the shirts pulled, pundits confusing what this was about, and even another batch of T-shirts to express dissatisfaction with the entire affair.

I got myself caught up on all this in the space of about an hour after my wife showed me kirbybits' post. It felt like the situation had been as addressed as it was going to get and the book was closed.

But then I started thinking about PAX East, which takes place right in my own backyard in five weeks. And I realized that this issue is definitively not settled — and it might actually have an effect on the atmosphere at PAX East that no one wants. 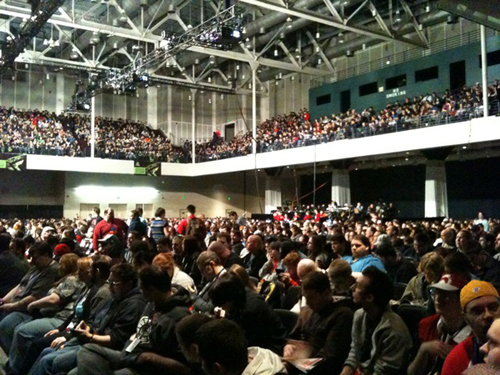 It took a comment from a writer I respect to decide that this does actually have enough to do with video games to warrant commenting on, but I still wouldn’t do so unless it was towards a constructive end.

To wit: I am asking PAX East 2011 attendees to please reconsider any ideas of wearing their dickwolves T-shirts to the event.

You will not be making any kind of brave statement about free speech by doing so. You will not be standing up for the right to use offensive humor. What you will be doing is disrespecting the spirit of a gathering which is meant to be inclusive for all different sorts of people.

Part of the issue here is that things are getting conflated. On the one hand, there’s a discussion about the comic and whether it was offensive or not. On the other hand, we have the production of T-shirts which were deliberately meant to inflame an issue which should have been laid to rest, T-shirts that should've never been produced in the first place.

I would argue that this isn’t about the right and wrong of rape humor, and cries of “Censorship!” aren’t something I have the patience to engage with by explaining to anyone what the word actually means. Nor is this about people being hypocrites for finding one sort of offensive humor acceptable while decrying another, which is how some figures in the games press are warping the story inappropriately.

We could talk about Wheaton’s Law — “Don’t be a dick” — which has become a mantra for PAX attendees in the interest of making the Expo a comfortable space for throngs of nerds who take enough abuse in the course of their lives.

But this T-shirt business is a conversation about sensitivity and nothing else.

My concern is that PAX East 2011 will be populated by Penny Arcade fans proudly flying the dickwolves' colors. I would not be surprised if we saw large congregations of Dickwolves Standard Bearers marching through the halls to defend their “right” to be insensitive unless someone tries to defuse this mess. And I have little doubt that the people who are against what they perceive those shirts to mean are going to have something to say about that.

What do you do when you are well aware that the humor you are about to employ is most certainly going to have severe, even debilitating ramifications on some members of the audience you are about to share it with? Do you go ahead and be deliberately offensive anyway because your “right” to speak however you want without consequence is being trampled, or do you make the decision to not use that particular joke at that particular time?

This wouldn't even be a concession that you would never use that humor again! You would simply be choosing not to use that humor in that particular moment. 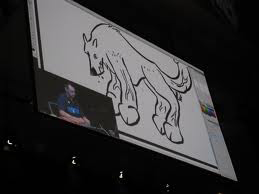 Anyone who goes to the Penny Arcade website has to know what they are getting into. Holkins and Krahulik can be rude, crass, and insensitive. I have limited sympathy for anyone who goes back to Penny Arcade after the first time they’ve been offended by something tasteless.

Penny Arcade the webcomic does not equal the Penny Arcade Expo, however. They are completely different entities — so we can argue for Holkins and Krahulik’s right to have all the offensive humor on their webcomic they want while at the same time arguing that to bring that humor out into a massive public event populated by an incredible diversity of gamers is inappropriate. That’s precisely what those T-shirts are going to do if they’re worn at PAX.

It’s worth reflecting on the fact that once an idea is released into the world, we don’t get to control it. The origin of “dickwolves” is moot to what we're discussing here. Whether or not the joke in the first comic was predicated on laughing at rape victims or wry commentary on the false morality choices in MMO quests is also moot. It definitively turned into a joke about rape, and that's when I wish someone at Penny Arcade had thought a little more carefully about producing those shirts.

We don't always get to decide whether someone else’s issues are valid or not. If someone says to us, “Seeing these T-shirts triggers me into horrible PTSD and causes me substantial amounts of distress,” our choice is to either respect those feelings and seek not to cause that distress or tell them, “Sorry, our right to wear these shirts is more important than your not having panic attacks while walking the halls of this event you would otherwise attend.”

Personally, I think that the quality of a person’s life is a little more important than whether someone gets to wear a particular T-shirt or not. There are plenty of other T-shirts they could wear. The only statement that anyone wearing a dickwolves T-shirt at PAX East will be making is that they’re a real-life troll exemplifying everything that PAX is not.

At last year’s PAX East, an attendee told a story about being in a hospital most of her life, and how much she appreciated Holkins and Krahulik’s Child's Play charity for bringing video games and toys to children who are in the position now that she already lived through. She broke down at the microphone, and Krahulik stepped down from the stage and embraced her. It was a poignant and touching moment that, to me, represented everything that’s good about PAX.

That’s the Mike Krahulik I want to remember, and the spirit of the event I want to feel, and if we ask ourselves honestly, that’s what we all want. So don’t be a dick. Leave the dickwolves shirts at home. After PAX East is over, you can immediately log on to the Internet and express your disgust at not having stood up for your principles if you feel so inclined…but give everyone else a break and don’t take the chance of ruining the event for anyone. The wrongness of asking people to skip PAX East just so someone else can be an ass should be obvious.

Dennis Scimeca is a freelance writer from Boston, MA. He has written for The Escapist, Gamasutra, and @GAMER magazine, and maintains a blog at punchingsnakes.com. Follow him on Twitter: @DennisScimeca. First Person is his weekly column on Bitmob concerned with meta-questions around the video-game industry and the journalism that covers it.