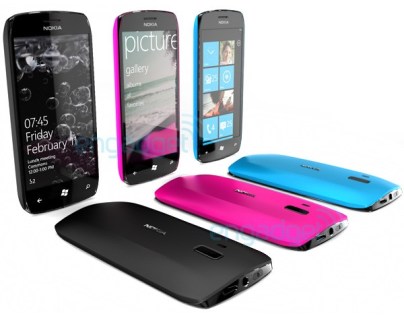 The concept picture, which was first published by Engadget yesterday, may not end up looking anything like what Nokia finally delivers, but it gives us a good sense of what the company is aiming for in its new partnership with Microsoft.

The hardware design looks like a clear evolution of Nokia’s current N8 and E7 smartphones, except with more curves and a Windows button on the front. Microsoft CEO Steve Ballmer mentioned that engineers at the two companies have been working together for some time, which is likely why this concept picture looks so final.

While at first it may seem incongruous to see a Nokia logo sitting above Microsoft’s Windows Phone 7 interface, the design of the concept phones definitely seem more inviting than Nokia’s current offerings — which look great until you’re confronted with their creaky Symbian interfaces.

Unfortunately for existing Nokia device owners, the concept picture is a painful reminder that they’re stuck with Symbian. There was a vague possibility that Nokia might eventually upgrade the N8 and E7 to MeeGo, the next-generation OS it’s building together with Intel, but an upgrade to Windows Phone 7 is definitely out of the question.