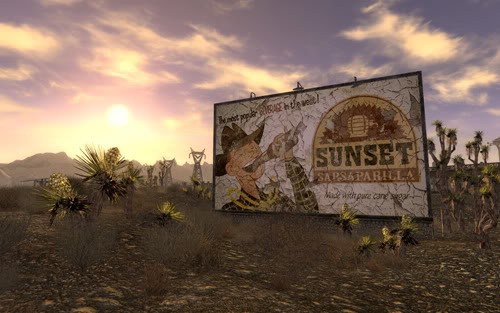 Revenge was the name of the game, and I was planning on getting some. I had dealt with danger after danger in the New Vegas Wasteland and had tracked the man who left me for dead in the desert with a bullet in my head to his casino. His name was Benny. After a little fast talk, I managed to convince this checkered-suited soon-to-be-dead man to talk speak with me alone. We moved off to one of his suites. Benny sat at a bar in the corner of the room while I stood a few feet behind him ready to draw the .44 Magnum revolver I'd smuggled past his guards. This was the moment.

And then it passed. Being the sucker for backstory that I am, I let him talk. Benny was spilling all the details about his plans, and I wanted to get as much info as possible before I stained his pretty-boy suit with a deep red. Then, he said it. He had his sights set on New Vegas, and he was willing to give me a part of it — willing to give me a key role in the plans that had originally required me to die.

I'm not stupid. I knew damn well that I was as good as dead as soon as Benny had what he wanted. Oddly enough, I'm also not very forgiving. I still wanted to introduce Benny to “the most powerful handgun in the world.” But I'm also greedy. The revenge that I'd set out for wasn't enough. I needed something bigger than mere equity or fairness. I wanted to take everything Benny has and put a bullet in his head. I wanted poetic justice. 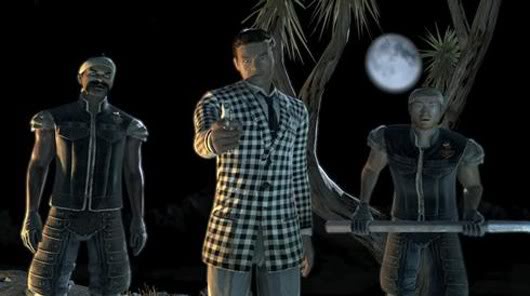 I was going to secure an empire for Benny, and right when he had it all…. Hello, Smith. Hello, Wesson. With a .44 caliber piece of lead, I'd beat him to the betrayal punch.

Benny got up to leave, and once he was out of the room, a group of his thugs ambushed me. They dropped easily enough, but they stalled me. Benny got away. I was fuming. I'd spent hours of my time — and weeks of in-game time — building up to this moment. What I'd wanted had been only a quick-draw animation away, and I'd fucked it up. As my expression darkened, my resolved intensified: Revenge would be mine.

I knew his plans and destination thanks to the little chat we'd had. I also took control of all the ground work he'd laid out for his plans. I had an army of loyal Wastelanders at the ready — not to mention a complement of extremely deadly robots. Once I was sure that everything he possessed was mine, I tracked Benny down for a second time. I put six rounds into the back of his head.

But I still wasn't done. I wanted to rule New Vegas like Benny had intended — to usurp his power and resources. Only then would my revenge be complete.

I've heard that after killing Benny many people logically move onto the plotline that decides the future of New Vegas. I couldn't move on. I'd spent all of my time setting up domino after domino, arranging one man's demise. Once I killed him, it set off a chain reaction that was triumphant, beautiful, and possibly even tragic.

I won a war by defeating both sides and became king, and every loose end came together how I'd planned. But ultimately, by manipulating and using so many people for so long, I'd become the man in the checkered suit.

When the credits rolled, I wasn't sure if I had done the right thing. All I knew was that it felt damn good.