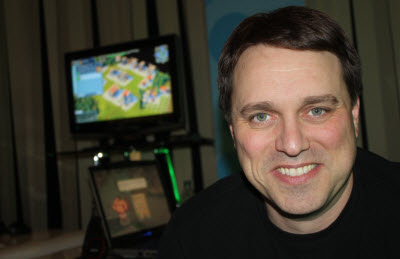 Age of Empires has sold more than 25 million copies in retail stores over the years. So it was a big leap when Microsoft announced last August that it would recreate the game as an online-only free-to-play game. This week, it took the wraps off the game and we got a close look at it.

If this free-to-play version takes off, it will become Microsoft’s flagship entry in the new age of downloadable online video games, where upstarts such as Gameforge, Nexon, Outspark and Perfect World are the contenders for the throne. Successful free-to-play video games can generate huge amounts of revenue and establish companies in the new digital distribution market.

As I approached the game at Microsoft’s event this week in San Francisco, I was surprised to run into Chris Taylor, the zany chief executive of Gas Powered Games. He disclosed that his company had been working with Robot Entertainment on the project and was now taking over as lead developer on Age of Empires Online. Gas Powered Games has specialized in real-time strategy (where you fight enemies that move at the same time as your own forces), having made ground-breaking games in the PC-focused genre such as Supreme Commander.

Everybody fretted over the death of real-time strategy when Microsoft shut down Ensemble Studios (the original developer of Age of Empires) a couple of years ago. But it’s hard to kill off a whole genre. Robot was started by former Ensemble Studios veterans and it began work on the online game two years ago. Now it has moved on to another game, Orcs Must Die. Taylor said that created the opportunity for Gas Powered Games to step in and finish the game, which still doesn’t have a launch date but is slated to come out this year. 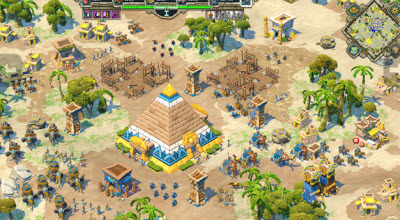 The online-only downloadable game won’t be the same experience as Age of Empires. It has a different art style and you most likely won’t be playing massive battles in the online version, as was possible in the older games. That’s a trade-off that will make the game more marketable. But there are benefits that come from having a persistent world that’s almost like a massively multiplayer online game.

Ian Vogel, a Microsoft producer, said the art style is more accessible. To me, it looks more like a cartoon than the realistic graphics of the older Age of Empires games. One downside is that the game is downloadable. That means users must download it to their computers before they can play it. In the U.S., that’s not a great thing since not everybody has great broadband connections and some people don’t trust downloads. Browser-based games, where no download is required, tend to do better here with the mass market.

Still, downloadable games can offer a great graphics experience and deep game play. The game has familiar combat between players, and it also has quests to embark upon. You can play cooperatively with friends or challenge them in matches. Since the game is integrated with your friends list on Xbox Live, you can engage in live chat. 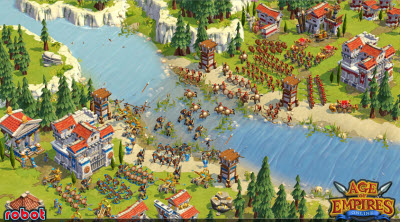 In this game, your empire’s capital city is always alive in a persistent world. You can customize your city, collect resources, create crafts and then trade them with others. You can build your forces and enter a combat arena with your friends or fight random battles. Those battles are a lot like the older multiplayer real-time combat sessions in the classic games. But now you can gain experience and collect winnings that can be used to build the persistent version of your empire. You can progress through levels and get access to more stuff.

Taylor says the cool thing about the game is that millions of people could play it without paying a dime. But you can take your civilization to the next level by purchasing a Premium Civilization Pack, which adds new game play and new experiences. The real sales trick for Microsoft is to convert as many people to paid accounts as possible. Typically, only 3 to 5 percent of players will pay, but that generates enough revenue to make a lot of games profitable. Success isn’t guaranteed, however. THQ recently decided to pull the plug on Company of Heroes Online after it failed to get enough people interested in paying.

With the premium version, you can get access to rare gear, unlock new units such as Armored Elephants and Civilization Powers. You can explore a full technological development tree, enjoy more player vs. player options, produce more kinds of crafts in new workshops, and earn in-game currency from the stores in your capital city.

Check out our video interview with Taylor below.