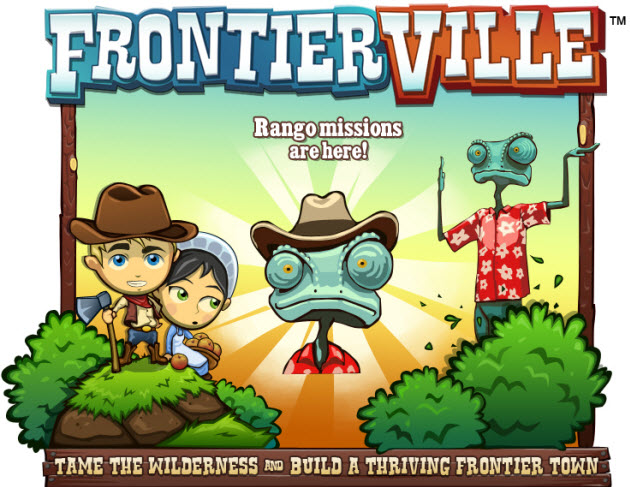 In a step up for social gaming, Zynga, Paramount Pictures and Nickelodeon Movies are announcing that the animated film Rango will be integrated into Zynga’s social game FrontierVille as part of a special advertising deal.

Zynga, the biggest social game company on Facebook, has created an in-game quest based on the Rango film to promote the film’s release in theaters on March 4. The deal is the first in which Zynga has integrated a major ad campaign within the FrontierVille game, which has more than 19.6 million monthly active players. This kind of deal could create a lot of ad impressions for the new film and it skirts the usual problems associated with marrying games and movies. It could therefore lead to a happier marriage between Hollywood and social gaming.

The FrontierVille players will be challenged with three Rango-related tasks. That includes finding Rango, the chameleon character voiced by actor Johnny Depp, as he blends into the frontier. The tasks also include encouraging friends to send each other water buckets, and view the film’s trailer in advance of the release. Players will receive a Rango statue (a virtual good) to add to their homestead on FrontierVille as a reward for completing the mission.

“The Rango campaign offers a fun way to interact with the film’s characters while enhancing game-play within FrontierVille.”said Manny Anekal, global director of brand advertising at San Francisco-based Zynga.

Once upon a time, movie makers commissioned lots of video games based on movies, both to boost the audience for movies and also to generate a lot of ancillary income. But as video game budgets grew and it started taking two years or more to make a decent game, that practice fell into disfavor. But with social game tie-ins, movie companies can reach huge audiences with targeted campaigns that can be created in a very short time. Filmmakers at Twentieth Century Fox also have a tie-in with Angry Birds smartphone game maker Rovio, which is doing a special version of its hit game for the upcoming animated film Rio.

Zynga previously cut a deal with Sony Pictures Entertainment to promote The Green Hornet movie with the Mafia Wars social game. And it also launched a campaign with DreamWorks Animations to promote the animated film Megamind by creating a “Mega-Farm” within Zynga’s FarmVille game. In the 24-hour promotion period, more than 9 million people engaged with the Mega Farm. The Rango quest begins today and runs through March 6 on FrontierVille.

Zynga has also partnered with 7-Eleven stores to promote Zynga products and games in 7,000 convenience stores. 7-Eleven offered 15 Zynga-branded products in its stores and 4 million codes from those products were redeemed in six weeks. About 75 percent of people who bought ice cream in the stores redeemed the Zynga codes. General Mills Cascadian Farm also cut a deal allowing the creation of a branded crop in Zynga’s FarmVille game. That allowed players to grow a virtual blueberry crop in the game. About 5 million users engaged. More than 500 million crops were planted, more than 1 million Facebook feeds were posted, and there was a measurable huge increase in brand awareness, brand lift, and purchase intent for Cascadian Farms.