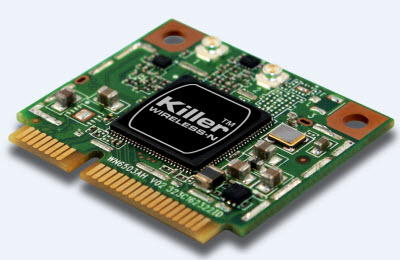 Surfing the web on a wireless network has never been a great experience. But Bigfoot Networks wants to change that with the launch of a new product that accelerates the performance of wireless networking five-fold.

The Killer Wireless-N adapter card for laptops is aimed at creating a no-compromise experience on the wireless web for everyone from gamers to video fans. As we noted before, if this takes off, Bigfoot could become a bigger player in the PC chip business, and consumers won’t have to endure as many frustrating internet slowdowns while using laptops on Wi-Fi networks.

Redwood City, Calif.-based Bigfoot Networks says the new adapter card (pictured right) can push the boundaries of Wi-Fi to allow smooth online games, high-definition video and high-quality audio. As with Bigfoot’s desktop-focused products, the new laptop chips allow users to get a lot of control over their internet experience. If you want to prioritize the delivery of games or video, you can specify that in the card’s settings.

Studies have shown that worldwide consumer internet traffic related to gaming, voice communications, online video and audio will grow 500 percent by 2014. Some 47.5 million people already play online games in the U.S., and users spend about 190 billion minutes per year on Skype, with 40 percent of those calls using video. In these applications, network latency (response time) means a lot. In games, you get more kills in a multiplayer combat game if you have a good connection, or no “lag.” With video conferencing, there is less stuttering, image blurring, and slowdown if you have good response times. And in Skype calls, better network connectivity means that your call clarity is good and you don’t lose calls.

But the popularity of these multimedia services is pushing wireless networks to the limit. When there isn’t enough speed, the video and audio will stutter or freeze entirely. Wireless networks are more prone to suffering from these problems than wired networks, says Michael Howse, chief executive of Bigfoot.

In the past few years, Bigfoot has become very good at optimizing a network for the fastest possible speed. It can deliver packets coming in from the web in .71 milliseconds, compared to 22.5 milliseconds for a normal network card. The average latency is 13 times better with a Bigfoot Networks solution. Bigfoot Networks created its Killer NIC network cards for hardcore gamers, who spared no expense in making their machines and networks faster for online games. It used a technology called Visual Bandwidth Control, which lets you take control of your broadband connection. You can prioritize the traffic coming through your system so that a video stream or conference call gets the highest priority in traveling through your system.

The Killer Wireless-N adapters support 802.11a/b/g/n standards, operating on the 2.4 gigahertz and 5 gigahertz radio frequency bands. The cards come in a half-size mini PCIe format and can be integrated directly into laptops. The Killer Wireless-N 1103 and 1102 adapters deliver data at a rate of 450 megabits per second and 300 megabits per second, respectively. The company says its performance is five times better on latency than leading competitors.

The Killer Wireless announcement is the latest in a string of big business deals and innovations for Bigfoot. In December, Bigfoot Networks launched its Killer e2100 solution that motherboard vendors could integrate directly into a graphics card. That enabled the Killer HD5770 graphics card from VisionTek, the first graphics card that combined Advanced Micro Devices graphics and a high-performance network accelerator in a single card. Kevin Wasielewski, chief executive of gamer computer maker Origin PC, says that gamers demand the best performance not only in games, but also in streaming movies, music and other kinds of media. The Killer Wireless-N adapters will be introduced this month in laptops from AvaDirect, CyberPower, iBuyPower, Maingear, Origin PC, Sager, the V-Machine, Velocity Micro and others.