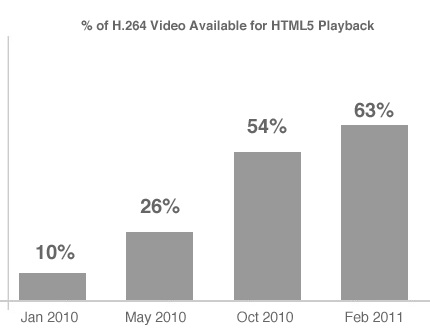 Video aggregator site MeFeedia has found in a new tracking study that the percentage of web videos compatible with HTML5 has jumped from 10% to 63% in the last year.

Using its video index, which consists of around 30 million videos from 30,000 video sources — including YouTube, Vimeo, and Hulu — the company spent the last year tracking the percentage of those that offered HTML5-compatible formats such as H.264, OGG, and WebM. The rise over the year, it witnessed, was rapid, having soared from 10% in January 2010 to 26% in May, 54% in June, up to 63% just this month.

With major players such as YouTube, Apple, and Microsoft rallying behind it, the format has quickly become a viable contender to Flash, which has historically been the dominant format for Internet video producers.

Famously, in a letter published by Steve Jobs last year, the Apple CEO provided numerous reasons for excluding Flash support in the company’s mobile devices and rallied his support behind HTML5, seeing it as a viable industry replacement for the future.