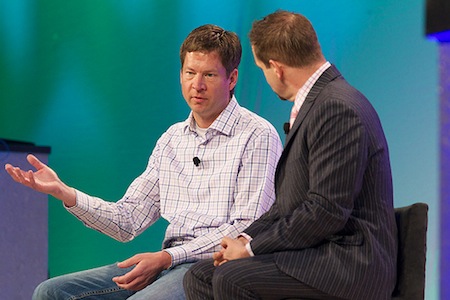 One Kings Lane chief executive Doug Mack took to the DEMO stage to try to explain the social commerce boom.

Private-sale startups like One Kings Lane and group-buying companies like Groupon are hot right now. Mack’s company, which focuses on home decor, recently raised a $23 million round of funding from Kleiner Perkins Caufield & Byers (which has made a big push into social networking in the last few months) and Greylock Partners (the firm whose social investments include LinkedIn and Airbnb). Mack, who was interviewed today by VentureBeat’s Owen Thomas at the DEMO conference that we’re coproducing, pointed to the investment as a sign that this isn’t just a fad: “The thesis is that social commerce is transformative.”

That’s because adding social features fundamentally changes the shopping experience, he said. For example, it functions as “purchase validation,” so that shoppers feel more comfortable buying a product without seeing it in-person. So if someone spots a product that they’re not familiar with, they can tell whether it’s a good deal by looking at social signals like whether lots of people are purchasing the item or putting it on-hold.

Those social signals can come from strangers, but they’re even more powerful when they come from friends or experts. Mack reminded Owen of his article about Yardsellr, where he described buying a sweater for his dog Ramona. Before making the purchase, Owen posted a photo of the sweater on Facebook and got positive feedback from his friends.

Integration with social networks not only improves the shopping experience, it also helps these services grow more quickly. More than half of One Kings Lane’s members were brought to the site by the recommendation of another member, Mack said — which is a much cheaper way to get new users than traditional advertising.

One of the main results of this trend is a big shift in who’s doing the online shopping. The first wave of e-commerce was dominated by men who wanted to buy a product as quickly as possible, because it was more convenient than going to the store. This wave includes more women who see online shopping as a fun and social experience, Mack said.

Add all that together, and he predicted that social e-commerce startups shouldn’t have much trouble raising money, since investors are “clambering” to get into the market.

“Continue to break your pick on the rock, because it’s going to be worth it,” he said.