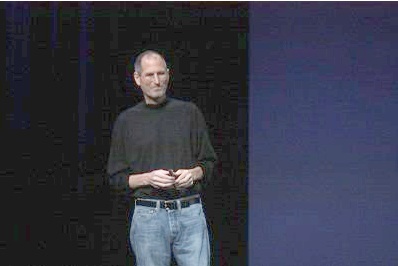 Steve Jobs took the stage today to unveil the iPad 2, the next version of its tablet computer — to the surprise of just about everyone, given that he recently announced he would take some time off from Apple for health reasons.

Concerns about Jobs’ health weighed on investors and ended up sending Apple’s shares down after he announced his temporary medical leave of absence in January. Apple shares fell as much as 6 percent in the following weeks before creeping back up to pre-Jobs-exit levels. But the company’s shares were up by as much as 1.2 percent today as Jobs’ appearance finally eased some of those concerns and doomsday predictions by media outlets.

Jobs took his leave from the company in January after issuing a rather terse letter to the media. It was the third time he took a leave of absence for medical reasons. Chief operating officer Tim Cook took control of the company, while Jobs still remained Apple’s chief executive. Jobs first left the company in 2004, when he underwent surgery for pancreatic cancer. He had a liver transplant in 2009 and left again. Each time, Jobs said only that his leave of absence was medically related.

Apple has been widely criticized because it has not laid out a distinct succession plan for when Jobs finally leaves the company for good, although the company says it has a plan in place. Shareholders weren’t even able to force the company’s board to talk about the succession plan at Apple’s most recent stockholder meeting. The proposal to disclose those plans was backed by investor-advisory service Institutional Shareholder Services, but Apple said revealing those plans would help competitors and make it harder to retain executives.

Apple’s chief executive and iconic leader took the stage to unveil the next version of the iPad, which featured mostly only incremental improvements such as a faster processor and a front-facing camera. Most of those features were expected, so the company focused on presenting some additional bells and whistles — like a better case that uses magnets to automatically put the iPad to sleep and wake it up once it’s opened.