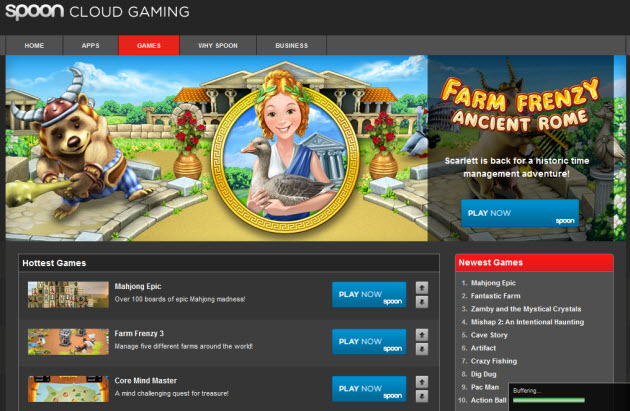 OnLive, Otoy and Gaikai have made a big splash with their cloud gaming services. But Spoon, a Seattle-based rival, has its own take on how to conveniently deliver online games to users as they demand them. And after almost five years of work, the company is launching its Spoon Cloud Gaming service today.

Announced at the Game Developers Conference in San Francisco, the service offers a lot of benefits similar to OnLive’s, where users can play games they haven’t downloaded to their computers. Today, Spoon is launching with more than 200 games on its web site — all for free. The list includes casual games such as Jewel Quest and Farm Frenzy to classics such as Pac-Man. If it works, then video game fans will have a new and inexpensive way to instantly enjoy online games without waiting a long time or paying a lot of money. And publishers will have a new distribution system that can deliver games to gamers in a fast and convenient way.

To play the games, you have to download a small browser plugin. After that, you can click on a game and it will launch with no installation process. On fast connections, those download take seconds. The company’s goal is to make the world’s apps and games instantly playable, anywhere. In fact, beyond games, Spoon also has thousands of apps available.

“This is an important moment for Spoon and the cloud gaming industry,” said Kenji Obata (pictured), founder and chief executive of Spoon. “Spoon’s unique virtualization technology introduces new ways for people to play and market games online. For the first time consumers can enjoy the benefits of cloud gaming, without the normal trade-off in performance.”

The trade-off in performance is what you get when you play Flash games online. You don’t have to download much with Flash, but the games look more like cheap cartoons than high-end works of art. OnLive solves the trade-off problem by taking advantage of a fast-internet connection and combining it with server-based gaming and compression. That is, OnLive stores and executes games in powerful servers in data centers. Then it compresses that data as small as possible and sends it to your computer at blazing speeds. You see cool high-end graphics on your machine that look as if they were stored and executed on your own computer.

Spoon’s approach is a little less radical. It downloads the games to your desktop or laptop and runs them locally. This hybrid processing model strips out a lot of the high-end server costs that OnLive pays, and it also gets rid of the need for very fast bandwidth. Once launched from the web, Spoon games behave like installed games and can even run offline for disconnected play. Spoon also behaves like server-based games do in one respect. It automatically syncs the stage of your game across all of your Spoon registered devices, allowing you to play an up-to-date saved game from any PC.

Spoon has gotten titles from a bunch of publishers, including Namco Networks, Alawar Entertainment, iWin, and 1C. I played Alawar’s Aztec Tribe game and it took me about a minute or two to get the game up and running, after registering first. I played the game on my laptop and learned how to build my little civilization. Then the game expired and it asked me if I wanted to pay $7 to buy it.

In most downloadable games, particularly those with good graphics, you often have to wait a long time. That tests the patience of many gamers who want instant gratification. But Spoon is fast enough to hang on to a player who might otherwise quit a big download. At the same time, it capitalizes on the resource that people already have — the computing power in their desktop computer — to reduce the need to have extremely powerful servers. By doing so, it preserves the responsiveness and offline capabilities of a game, even though it is nominally operating as a cloud game.

Spoon says publishers and developers will like this because Spoon enables them to distribute their games on the internet cloud for free. The gaming industry can thus deliver games on demand. Spoon clearly needs a somewhat decent computer on your end, and the games that are available on it now are not extremely demanding. So it remains to be seen if Spoon can grow up to be competition for the likes of OnLive, Gaikai or Otoy, which are focusing on high-end games. But it’s a new player with a new take on the industry.

For gamers, it’s convenient to try games with no installation (or minimal installation). Spoon’s DRM and payment system makes it easy to turn demos into purchases. For developers and publishers, Spoon becomes a new way to get games to spread in a viral way. It’s essentially a new marketing tool.

The company was founded in 2006 and has 20 employees. It has not raised outside funding. Obata got the idea as a doctoral student in theoretical computer science at the University of California at Berkeley. He was developing application virtualization technology and thought it would work with games. I first met him at the Casual Connect game conference in Seattle last year and the system was working fine then. But the company now has much more support from the game industry. It could use bigger names, but 200 games is pretty good for a new system launch. Spoon isn’t yet available on the Mac.