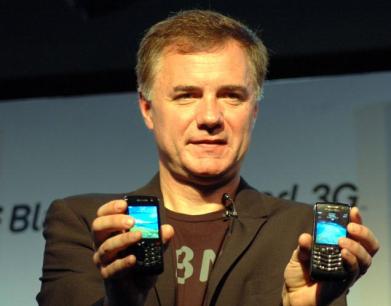 This probably isn’t the way Research in Motion wanted to prepare for its long-awaited BlackBerry PlayBook tablet launch: The company announced Friday that chief marketing officer Keith Pardy is leaving the company for “personal reasons,” the Wall Street Journal reports.

Pardy will continue to assist RIM over the next six months, which means he may still play some hand in the PlayBook’s launch — but he likely won’t be as much a guiding force as he would have as CMO. Pardy told RIM about his decision to leave the company last month, a person familiar with the matter told the WSJ. The company hasn’t said whether it’s bringing on a new head of marketing soon.

RIM is facing one of its biggest product rollouts ever with the launch of the PlayBook, which is expected to occur some time in March or April. (The most recent rumor puts the tablet’s launch on April 10.) It would have been a difficult launch for RIM even with Pardy’s full attention. Now that he’s on his way out, RIM will likely face even more challenges.

The PlayBook isn’t just RIM’s first tablet entry, it’s also the company’s first attempt at a sexy consumer product, which stands apart from its traditional focus on enterprise customers with its BlackBerry smartphones. The tablet will be going head-to-head with Apple’s iPad 2, as well as tablets running Google’s Android 3.0 operating system, like Motorola’s recently launched Xoom. RIM will need all of the marketing talent it can get to make the PlayBook register with consumers among such heavy competition.

I liked what I saw of the PlayBook at the Consumer Electronics Show in January. The tablet was fast, and the interface looked far beyond the clunky BlackBerry software RIM is known for. It’s running an operating system based on software from QNX, a company RIM bought earlier last year. QNX’s software will eventually power RIM’s future smartphones. The company thus far has failed to take on the touchscreen interfaces of the iPhone OS and Android — it’s most recent flagship device, the BlackBerry Torch, was a dud.

Photo via The Hindu