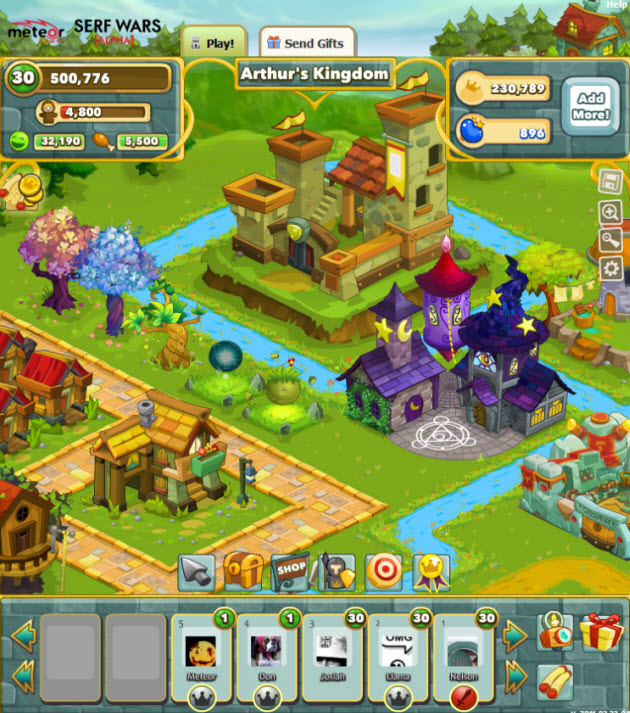 Like many game startups, Meteor Games has been through a strategic pivot. It started in hardcore online games and has now shifted to where the  users are. The company is now focused on making games for Facebook and it is launching its new title Serf Wars today.

The game and others like it from Meteor are a test as to whether veteran game developers who have been successful in past lives can strike it rich again on Facebook, where newcomer Zynga dominates the field. It hasn’t been easy for anyone to challenge Zynga, but the rivals keep trying, since they know that Zynga has earned itself a multibillion dollar valuation based on its Facebook success.

The Serf Wars game is the latest product from Donna (pictured center) and Adam Powell (pictured right), the married couple that brought us Neopets, the first major web-based kids game of its kind. They started Neopets in 1999 and sold it to MTV in 2005 for $160 million and then started Meteor Games in Beverly Hills, Calif., in 2007. 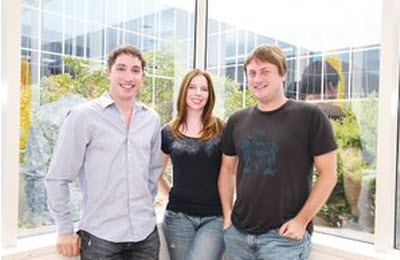 At Meteor, the Powells (along with CEO Zac Brandenberg, pictured left) wanted to create a massively multiplayer online game that combined social and hardcore features. But they abandoned that title as it became more and more evident that they should make Facebook titles with casual themes. By early 2009, Meteor Games switched all of its resources into making Facebook titles.

“We had to go one stage simpler,” said Donna Powell.

Their first Facebook hit was Island Paradise, a farming game with a tropical theme. About a month into the launch, users started buying items such as fertilizer with real money. It has been monetizing ever since. The casual titles remains a hit with more than 400,000 daily active users. Enough players are buying virtual goods within that game to make Meteor into a profitable entity, even with more than 70 employees.

That success gave the company more confidence to invest in multiple projects at the same time, with roughly 15 to 20 people on a team working for months at a time. Meteor has also launched Sweet Shop and Ranch Town as well, although those games haven’t been as big as Island Paradise.

Donna Powell said that Serf Wars is an attempt to straddle multiple audiences. It has a battle element that will appeal to males, with a beautiful art style that will appeal to females. It combines both hardcore and casual features. Donna Powell said she thinks the new age of Facebook games resembles the early age of web games in the 1990s. Serf Wars can be played in short game sessions, but it also has a lot of depth to keep players busy for a long time. 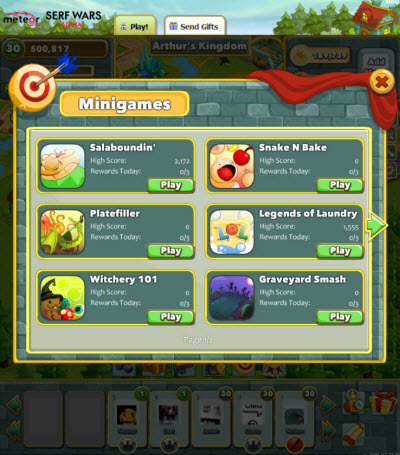 The Neopets online game was novel in that neophyte audiences who tried the game had to be taught how to play a game. Neopets drew the players and then kept them playing by creating missions and avatars, going on quests and earning achievements. Donna Powell feels the same thing is happening now, where Facebook players have to be taught.

Donna Powell said that the company is also making a branded-title with a major movie studio. That game is expected to launch in May, and there are a couple of other titles launching later this year. The company isn’t yet investing in mobile games.

The focus is not to build games around a monetization scheme. Rather, the company focuses on fun. Eventually, the market may mature to the point that the company’s original hardcore game might become marketable again.

“We believe that the best game will win,” Donna Powell said. “People will be ready to play the best games and get engaged. We see that engagement is the most important trend to watch.”

So far, Meteor Games has been self-funded. But Donna Powell said there is a lot of interest from investors in the game market now and the company is evaluating its opportunities.