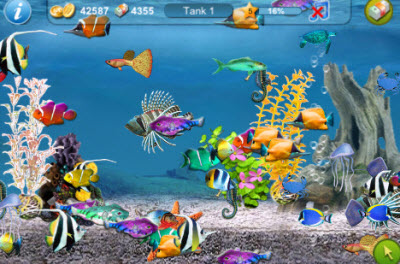 When it comes to simulating aquariums on the iPhone, nobody beats Gameview Studio‘s Tap Fish game, which has been downloaded more than 10 million times in the past year. And Gameview says that the game was one of the top-grossing free-to-play mobile apps of 2010 thanks to sales of virtual goods inside the game.

Mobile games are rapidly generating a lot of investor interest in the gaming sector. The frenzy over mobile games drew harsh comments from Satoru Iwata, chief executive of Nintendo, at the Game Developers Conference in San Francisco last week.

“I can understand from his perspective why he would say that, because he sees mobile as a threat,” said Riz Virk, chief executive of Gameview in Mountain View, Calif. “But I think the center of gravity is shifting toward social and mobile games. There is a little paranoia about that.” 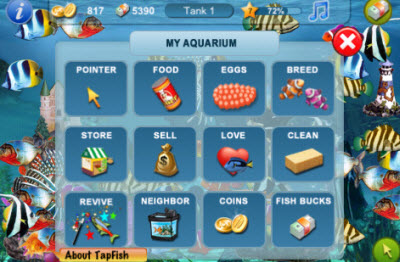 The 10 million downloads is a pretty good showing for Gameview, which was acquired in September by Japan’s DeNA. Tap Fish is a simple game, where you can buy Fish bucks with real money to acquire premium items.

“Others tried to copy us, but we got it right,” Virk said. “We didn’t make it too overwhelming or complicated.”

Now Gameview has expanded its Tap franchise to include Tap Jurassic, Tap Ranch, Tap Town, Tap Mall, and Tap Birds. It also launched the digital collectible card game Titans vs Olympians. Relatively few mobile games have hit the 10 million download number; Virk says the ones that do are the highest-quality games.

Virk said that the company plans to expand to the Android platform in 2011. Android grew its market share from 5.2 percent in the U.S. to 28.7 percent of mobile devices, according to comScore. Roughly 350,000 new Android-enabled devices are launched every day. And since in-app purchases will soon be available on the Android Market, developers are more excited about making games for Google’s platform.

Virk said that lots of indie studios are shifting into mobile games, where it doesn’t take huge budgets and giant teams to finish a game.

Virk said that Tap Fish is the company’s best performing game in terms of users as well as the percentage of users who pay for items in the game. Virk said the company studied the iPhone market and figured out that simulations were in short supply(TinyCo said the same thing when it raised a recent round). It then hit the market with a lot of different simulations games. Now that the company is established, Virk said the focus is on making high-quality games and more engagement, or high average play sessions.

As Gameview launches its games for the Android platform, it will add social networking technology from its sister company Ngmoco. Gameview has more than 120 employees, including 15 in the U.S. and a large team in Pakistan. Gameview was founded in 2010. Rivals include Electronic Arts, Glu Mobile, Disney-Tapulous, and sister company Ngmoco.