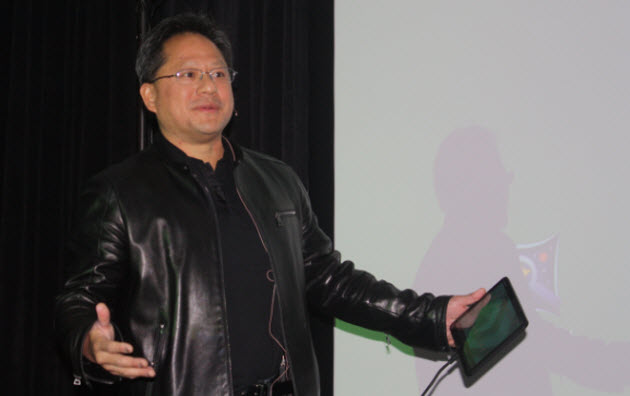 Nvidia chief executive Jen-Hsun Huang believes that the revolution in mobile computing electronics, driven by demand for smartphones and tablets, will eventually disrupt both the PC and server markets as well.

By engineering chips for mobile computing, graphics chip maker Nvidia is focusing on energy efficient computing so that mobile devices can be both powerful and have long battery lives. That kind of computing is exactly the kind that will be necessary in the PCs and servers of the future, Huang said.

Huang articulated many of these ideas during our recent Q&A with him. But he elaborated on them at the analyst meeting. The mobile computing shift is why Nvidia has invested so heavily in its Tegra mobile computing chips in the past five years and paid particular attention to parallel computing, where many small cores — or brains — can operate much more power efficiently than a single big core. As an analogy, Huang said that a multiple-cylinder car engine running at a reasonably fast RPM (revolutions per minute) is much more efficient than a single-cylinder engine running extremely fast.

Over the next four to five years, Tegra will go from eight cores now to more than 100 in a single chip, Huang said. That gives a good clue as to how Nvidia is approaching the design of Project Denver, the code-name for a high-performance ARM microprocessor that the company revealed at the Consumer Electronics Show in January. Project Denver is expected to be able to run Windows, which Microsoft is adapting to run on ARM chips in addition to the x86 Intel-compatible chips that they have run on in the past. Microsoft demoed a future version of Windows running on Nvidia Tegra processors at CES.

Project Denver is clearly the path that Nvidia will pursue as it uses mobile chips to disrupt the PC chip market.

“That’s a wonderful opportunity for us,” Huang said. “You will have a PC that is thin and light, has a long battery life, and has the productivity capability of Windows.”

Huang said servers will be disrupted because of rising energy costs. “If your energy bill is $10 million a year,” Huang said. “Then you would rather move from 20,000 server cores to more than 20 million if it means it will increase performance and reduce your energy bill at the same time.”

By moving into the mobile market, Huang said that Tegra boosted Nvidia’s total available market by six times. Nokia shifting from Symbian to Windows software will be a “fabulous opportunity” for Nvidia, Huang said. He noted that upcoming four-core Kal El chip, which now has working prototypes, has five times the performance of the previous-generation Tegra chips.

It took PCs about 15 years to fully disrupt the minicomputer and mainframe business. But mobile computing is changing the world faster and will likely disrupt the PC and server markets in a much shorter time, Huang said.

“The mobile computing revolution is a seismic shift,” he said.

Asked how Nvidia can compete with Intel and Qualcomm in manufacturing technology, Huang said Nvidia relies on Taiwan Semiconductor Manufacturing Co., a contract chip manufacturer known as a foundry, for its manufacturing firepower.

Huang said Nvidia is working with almost every single computer maker now to get their first-generation tablets to market. Huang said that the company will launch new Tegra chips on a regular cadence, much like it did in the early days of the PC revolution, when new chips came out every six months or every year. “We have to keep that rhythm,” he said.

One analyst noted that the Motorola Xoom, an Android tablet that has a Tegra 2 chip from Nvidia, costs $800 while the Apple iPad 2 will cost less ($499 to $829). But Huang said the Xoom is not the only competitor to the iPad 2 and that users should be careful to compare the technical specifications of the tablets before rushing to judgment that one machine is more cost-effective than another.