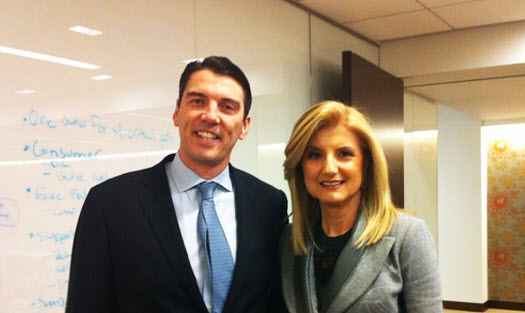 AOL is expected to lay off 400 to 500 people in the U.S. starting tomorrow, according to a report citing unnamed sources in AllThingsD.

The New York-based internet giant is expected to eliminate jobs in targeted areas of the company. Chief executive Tim Armstrong (pictured right, with Arianna Huffington of the Huffingtong Post) signaled that the layoffs were coming last week. The moves reflect AOL’s big push to make more money and redefine itself in an age of ever-increasing media competition.

Sources said that no staffers will be let go in the network group of the ad sales unit. But editorial and other media product groups will be hit. The company has more than 5,000 employees, so the layoffs add up to 8 to 10 percent of the company.

AllThingsD said that Jonathan Dube, AOL’s vice president of news, is among those leaving. He joined AOL in November after leaving a position as president of ABCNews.com.

The content side of AOL is taking the brunt of the layoffs due to overlap with the Huffington Post, the web site created by Arianna Huffington that AOL bought for $315 million in a deal that closed on Monday. Huffington is now running all of AOL’s content efforts. AllThingsD didn’t say whether the moves would affect TechCrunch, which AOL also bought recently.

AllThingsD also wrote that 400 jobs will be eliminated in India and 300 more will be transitioned to contractors there.