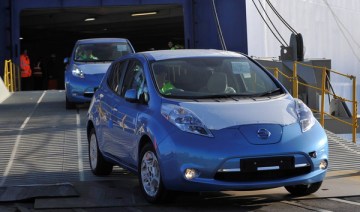 As gas prices rise, electric cars look better and better. But any chances manufacturers had the last time gas hit $4 a gallon were extinguished thanks to the 2008 recession, which made electric vehicles’ high upfront costs unpalatable.

Now it looks like they’ll have a second chance to capitalize on high gas prices as prices have once again risen to the occasion.

The price for crude oil futures has crossed the $100 mark — hitting as high as $104 per barrel. Some gas stations in the Bay Area and across the country are already selling gasoline for $4 per gallon or more. Despite a number of car companies working on increasingly fuel-efficient “classic” vehicles that run on gasoline that can run 40 to 50 miles per gallon of gasoline, it’s time for electric-car manufacturers to get their marketing engines revved up.

Existing car manufacturers are going on the offensive to capture a growing part of the population interested in electric cars. General Motors recently returned to the public markets post-bankruptcy, raising $20 billion in part on the promise of a sleeker, greener lineup led by the electric-powered Chevy Volt. Nissan, Ford and GM are all plowing forth with all-electric and hybrid offerings. Nissan, in particular, wants to grab 20 percent of the global electric-car market with its newest model, the Leaf.

The market looks good for upstart manufacturers, too. Tesla Motors, despite piling up losses to get a new line of electric sedans rolling, has hit the ground running with its first model, the Roadster — which, I can say from personal experience, is a pretty nice ride. Coda is about to debut an five-seat sedan with an electric motor, of which it hopes to sell 14,000 in the first year of production. The company is in the midst of raising its fourth round of funding, with the first $75 million secured before Christmas.

The price tag for an electric car is still going to bother most potential buyers. The Nissan Leaf, for example, costs around $33,000. Coda’s electric vehicle costs $45,000 before tax credits given out to electric car buyers. General Motors is asking car buyers to shell out $41,000 for its Chevy Volt. But electric-car owners should be able to make up those costs in the long run — at least, according to George Parrot with GreenCarReports.com. He expects his fuel and maintenance costs to go from around $2,600 a year to $300 a year after switching from hybrid electric cars to full electric cars.

Silicon Valley might or might not be in a tech bubble, depending on who you are asking — and we all know how well the last tech bubble turned out. But there’s nothing frothy about the inexorable rise of gas prices. Barring another cataclysmic recession, this may be the moment for electric-car manufacturers to pump up the market.