Email is fast and quick, but it’s often tone-deaf. When we send a message in the heat of the moment, we don’t think about the consequences of what happens when the person receiving it misinterprets the tone of the text.

Lymbix has figured out a way to head off those moments of unintended passion. It uses artificial intelligence to decipher the emotional tone of your sentences and alerts you to any “negative message” you may unwittingly be sending out. The company’s ToneCheck program is like a spell checker, fixing the tone of your messages so they match your intentions. The second version of ToneCheck is launching on March 9 for Microsoft Outlook users.

The Lymbix technology is an interesting application of artificial intelligence (AI). If it works, processes will work better, customers will be more satisfied, and employees will be happier.

“What’s worse than an email full of misspelled words is an email that conveys the wrong tone,” said Matt Eldridge, chief executive and co-founder of Lymbix.

Getting help with communications is increasingly important because people are using email and other non-direct communications more frequently. And since the emotion behind written text can be misunderstood, people need more assistance in the form of a gut check or reminder in order to safely send a higher volume of email messages. It offers feedback in real-time and can offer guidance in a granular fashion on tonality related to friendliness, enjoyment, amusement, contentment, sadness, anger, fear, and shame.

The new single-use version of ToneCheck will be available free for download on March 9, while corporate enterprises could sign up for an enterprise license. Lymbix will also license its ToneCheck to others in the form of its Sentiment Applications Programming Interface (API). A company could conceivably use ToneCheck to screen incoming customer support messages for irate customers and forward those to the customer service representative with the best ability to calm a person down. 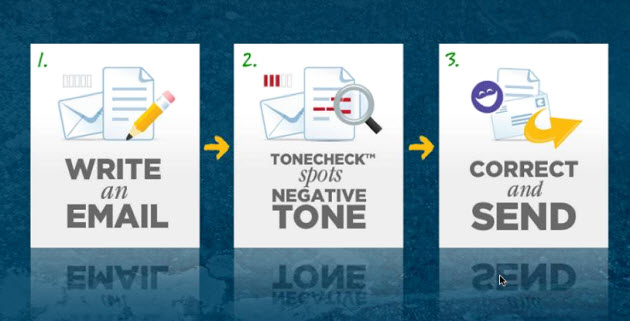 Messages can also be screened with particular concerns in mind, such as messages that might be considered sexual harassment. Companies could use it to keep the tone of outbound emails and internal communications in check.

Based in Moncton in New Brunswick, Canada, Lymbix was founded in February, 2009, and it has 13 employees. Rivals include Lexalytics in sentiment analysis, but there is no direct competition for ToneCheck itself. The company has raised $2.4 million in seed and angel funding. Eldridge co-founded the company after he had a bout of trouble getting his tone right in email communications. When he wanted to appear excited, he was often coming off as pushy or aggressive. That was particularly true when Eldridge was trying to close franchising deals for his former employer. His co-founder is Josh Merchant, chief technology officer.

The product’s AI has been taught natural language used in emails and social contexts. It evaluates the level of ambiguity where many other sentiment technologies break down. Eldridge said that one of the keys is to make the AI adaptable so it can stay up to date with all of the slang that people use. The AI tries to identify the real emotion in any section of text. Users see a Tone Alert indicator light up on their screen when an otherwise pleasant or neutral email takes a negative turn. It identifies the offending sentence to the user.

The company launched the first version of ToneCheck in July, 2010, and it was downloaded more than 25,000 times. But some people thought it was too complicated. So Lymbix has simplified the app with the new version. Eldridge admitted, “Our first version wasn’t very good.” But the new version is streamlined in that it only alerts the user when there is a red flag associated with a section of text. As you can see below, you can click on the red bars in the lower right corner to view a larger drop-down menu with the offending sentences highlighted. 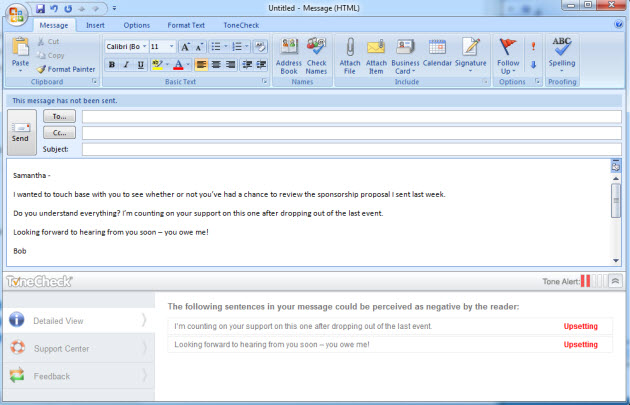