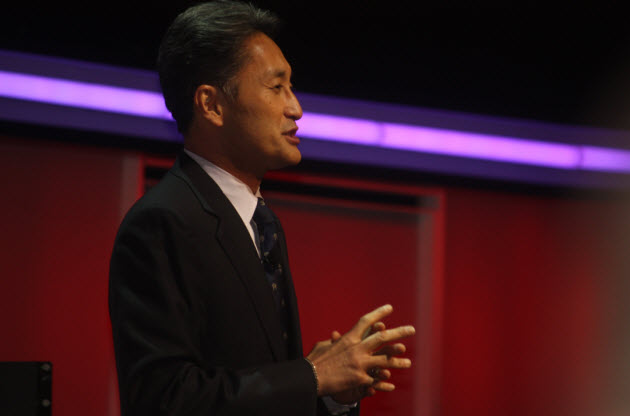 Sony announced today that it will combine its consumer businesses into a single entity headed by former PlayStation chief Kaz Hirai. The move may set up Hirai to succeed Howard Stringer as chief executive of the Japanese company.

Sony said in a statement that the change will empower “the next generation of Sony’s management. Stringer, who is 69, is expected to step down around 2013. The move is a recognition that video games are core to Sony’s future and that consumer devices are still in the midst of a convergence. The change shows that the fundamental technology shifts that are powering Silicon Valley now are also rippling through technology giants around the globe.

Under Hirai, Sony will combine its television, game, PC, and mobile divisions into a single Consumer Products & Services Group. Hirai is effectively in charge of all of Sony’s consumer electronics businesses. A second division will include Sony’s semiconductor, battery and digital component businesses, which will be led by Hiroshi Yoshioka. The changes will take effect at the beginning of April.

Hirai has been an agile leader within Sony. For many years, he supervised the North American video game business during the critical years when Sony took the No. 1 market share in the game business from Nintendo — and then lost it again with the PlayStation 3 generation. When the father of the PlayStation, Ken Kutaragi, retired in 2007, Hirai was named as his replacement for the global PlayStation business, known as Sony Computer Entertainment. In 2009, Hirai was promoted to head of Sony Networked Products & Services Group, which included Sony’s game, PC, networked mobile and network service businesses. That included the declining Walkman music player business and the online distribution of music and videos.

Like Stringer, Hirai has a jovial personality and a perfect command of English. I did frequent interviews with him during his time with the PlayStation business in Foster City, Calif. He had a way with words. When the PlayStation 2 soared to the top of the charts, Hirai declared, “The console wars are over.” Nintendo’s newly minted CEO, Satoru Iwata, shot back, “What an arrogant thing to say.” Nintendo had the last laugh when it launched the Wii console. Sony went from No. 1 to No.3 in consoles, behind Microsoft’s Xbox 360 as well as the Wii. But Sony has stayed relevant in the game business and has sold more than 48 million PS 3s and 66 million PlayStation Portables. In the meantime, Apple has emerged as Sony’s real nemesis.

One of Hirai’s most recent tasks was to whip Sony’s networked strategy into shape. The company now has lots of internet-connected TVs, a Sony PlayStation Network with 74 million gamers, and an upcoming cloud-based music service. Sony chairman Yotaro Kobayashi said Sony is now entering the “second phase of its transformation.” Sony Ericsson just launched the Xperia Play phone with PlayStation controls, and Sony is launching a new handheld game system, the NGP, this fall.

One possibility in the future is that Sony could break itself into two different companies, one focused on consumer products and the other focused on components. But if it did that, it would be heading in the opposite direction of Apple, which is now designing its own chips.