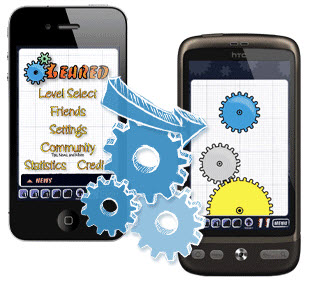 Munich-based Scoreloop makes mobile games more social by infusing them with features such as achievements, leaderboards, friend requests and multiplayer challenges. It started on the iPhone and now it is encouraging developers to make games for Google’s Android operating system.

This move is another nudge that could get the snowball rolling in Google’s favor as it battles with Apple to dominate the mobile ecosystem. And it shows that development talent is still a scarce commodity and it’s critical to have developer support for a growing mobile ecosystem.

Earlier this week, rival OpenFeint launched its own effort in partnership with China’s The9 to get Apple developers to shift to Android via a program that will pay for the costs of building Android versions of iPhone games. But Scoreloop chief executive Marc Gumpinger says that his company quietly launched the program in January to remove the operational, legal, and financial overhead of porting games from one platform to another.

“We are not just throwing money at developers,” Gumpinger said. “We have that aspect as well. But it’s more about development resources and market knowledge. We want it to be a hassle-free process for them”

While OpenFeint intends to offer funding as a primary feature of its program with developers, Gumpinger said Scoreloop is working with developers who are already successful on the iPhone and don’t need as much money to adapt games.

He says the program will assist developers who don’t have time to deal with the hassles of moving to a new platform. Two top iPhone games, Geared and Toobz, have already used the program. Together, those games have been downloaded more than 20 million times on the iOS, or Apple’s mobile operating system. Developers can apply to be part of the program, which requires them to use Scoreloop’s social features in their apps.

Gumpinger said the number of developers supported will depend on the applications that come in. But his company’s approach is to work with the highest-quality mobile developers. That suggests that Scoreloop will likely work with fewer developers than OpenFeint. But the exact number isn’t obvious right now.

Scoreloop was founded in 2008 and it is funded by Target Partners and Earlybird. The company says its partners are adding users at a rate of a million players a week. Scoreloop has more than 50 employees and its mobile social platform was ported to Android more than a year ago. Scoreloop also supports the iPhone, Samsung’s Bada, and Microsoft’s Windows Phone 7.