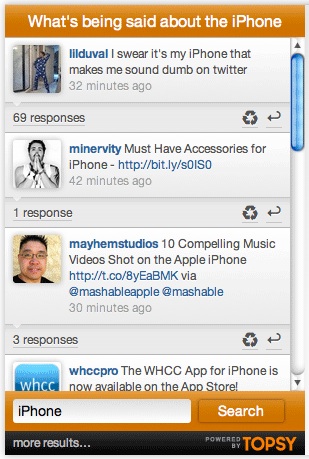 Some of the excitement around real-time search seems to have died down recently — I’m no longer seeing hordes of startups embracing the term, and some of the most prominent companies that were active in the space have refocused. But investors still seem to be optimistic about San Francisco startup Topsy, which just announced that it has raised $15 million in a third round of funding.

Topsy isn’t just offering a consumer service. It recently launched Topsy Social Modules, which allow publishers to add real-time content to their websites (you can see a sample module above), and Topsy Social Analytics, which helps businesses see what’s becoming popular on social networking services. Topsy says its technology is used on hundreds of websites, including those owned by IDG Media, The Huffington Post, and Discovery Communications.

“With the market consolidation of the last year, Topsy has emerged as the only real-time search architecture capable of becoming a web-scale search platform,” said BlueRun partner John Malloy in a press release.