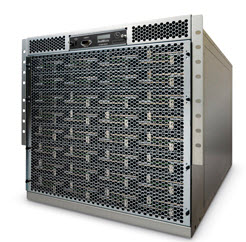 Intel said today that a new category of “micro servers” is growing fast as power efficiency and density of computing rise to the forefront. As a result, Intel wants to introduce standards to the market to foster its growth.

The world’s largest chip maker normally designs server chips to run as fast as they can within a given power level so that it can be used in a traditional board and rack configuration within a data center. But the micro servers — created by companies such as SeaMicro (server pictured right) — try to pack a lot more single-chip boards into a smaller space with much lower power levels and a
smaller overall footprint.If these micro servers take off, Intel may be able to stave off low-power rivals such as ARM from taking a chunk of the server business.

These micro servers are a new vector for innovation in servers and Intel wants to foster their growth.The question is whether a standard will slow the market down or broaden it so that lots of companies can make more money in the market.Intel expects that micro servers could become 10 percent of the total server market in the next four to five years.

Boyd Davis, general manager of Intel’s Data Center Group, said that Intel plans to create micro server chips that consume as little as 10 watts by 2012. Today, Intel’s Xeon server chips run at 45 or 30 watts.In the coming months, it will offer a 20-watt Xeon chip and a 10-watt Atom chip designed for servers.

The micro server vendors have created “density-optimized” servers, or those with many small one-socket servers that share a chassis, fans, and switching to get higher efficiency and density (or more processors in a given space).They can get four times as many servers per rack, run on fewer fans and power supplies, and can still run a full range of single-processor applications. The idea is that certain applications will work better on many low-power dense servers than on a handful of more powerful but power-hungry servers. SuperMicro and SeaMicro have introduced non-standard machines in the recent past. But Dell, Tyan, Quanta Computer and Intel are moving toward standard modules.

Intel said that the micro servers will be appealing to web site hosting companies that have lots of customers with relatively low-traffic web sites.The company says that developers will be able to analyze their softwrae running on a range of Intel-baesd micro servers in a new Intel Micro Server Evaluation Lab.

The micro servers are not unlike low-power blade servers launched years ago. But at the low end of the market, Intel said there is enough computing power to do the job right.

SeaMicro feels that the opportunity for low-power, purpose-optimized servers is well above the 10 percent of the total server market in the four to five year timeframe that Intel has suggested, said John Turk, vice president of operations at SeaMicro.

But he said this announcement from Intel recognizes there is real opportunity. SeaMicro is not working with Intel on the standards, as it naturally feels it has an advantage now. But it is encouraged that Intel is pushing for innovation in the micro server market.

In the big picture, Intel probably loves the fact that SeaMicro is an ally against ARM. Andrew Feldman, chief executive of SeaMicro, said in an interview that the fact that Intel has put an Atom chip on its server roadmap is a huge recognition of the fact that micro servers are a good idea and that Intel is serious about heading off a threat from ARM. That threat from ARM isn’t imminent, but it will likely come.

“These are all good steps,” Feldman said.

Intel’s own interest is in seeing lots of server vendors selling the best possible micro servers. So Intel is essentially motivated to help SeaMicro’s server competitors. It’s a combination of competition and cooperation.

Gio Coglitore, director of Facebook Labs, said on the call, “We aren’t trying to cram a desktop processor into a server anymore.”

Coglitore said that Facebook has tested micro servers and believes that deployment will happen in the 2011 and 2012 time frame.